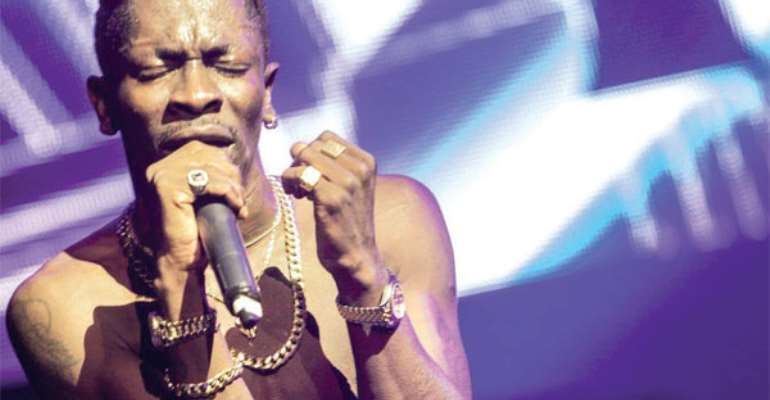 Shatta Wale, last Friday treated music fans in Cape Coast to his repertoire of songs when he performed at an event dubbed “Storm Reign Concert”.

The venue according to reports was filled to capacity as thousands of music fans were at the gate trying to find their way through to catch a glimpse of the various performances.

The performance of Shatta Wale delighted patrons, as his stage act brought more excitement into the show.

The 'Storm Reigns Concert', Cape Coast edition is the second in the series of musical concerts being organised to promote Shatta Wale's 'Reign' album.

The show was part of activities put in place to celebrate this year's edition of the Oguaa Fetu Afahye which ended last Saturday.

The dancehall artiste, the headline act for the concert, performed all his hit songs whilst the audience screamed out the choruses.

He thrilled fans with hit songs such as Taking Over, My Level, Ayoo, Dem Confused, Gringo, Everybody Like My Thing, Thunder Fire, Kakai, Forgetti, Baby, Freedom among others at the event which attracted thousands of music lovers from all walks of life.

It also saw performances from artistes such as Kofi Kinaata, Patapaa, Teephlow and a host of others.

The “One Corner” hitmaker Patapaa also wowed the crowd with his fast-and mid-tempo rap.

At the event, he was full of energy and his stagecraft was excellent. He dished out most of his popular hit songs before unveiling his latest single ‘Woho Aba’ featuring Fameye and Kwaw Kese.

Teephlow and Kofi Kinaata also put up spirited performances as always, with good stagecraft and singing skills. They gave a good account of themselves on stage.