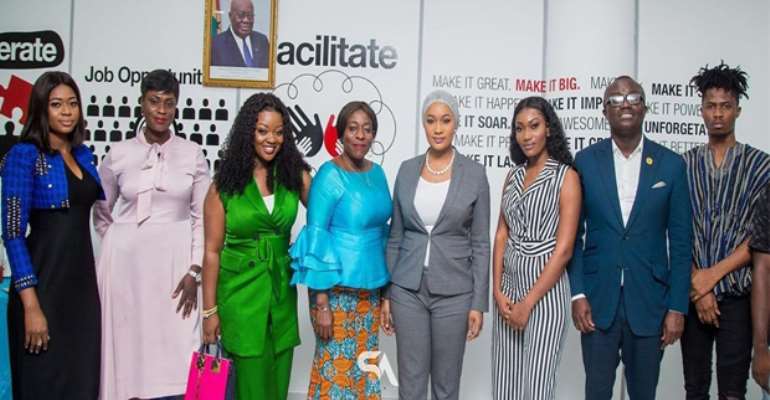 Management of the Youth Employment Agency (YEA) says songstress Wendy Shay is still an ambassador of the agency despite earlier reports that she's been sacked.

Wendy Shay‒ who joined other ambassadors of the YEA last week to pay a courtesy call to former President John Kufuor‒ was heavily criticised over a dress she wore to see the president.

A picture she took with the ex-president went viral, and many Ghanaians lambasted her for her revealing dress.

Wendy Shay subsequently rendered an unqualified apology over her inappropriate dressing and promised to do better next time.

But earlier reports published by other media portals claimed that she was sacked as ambassador.

Some sources close to the agency also told NEWS-ONE that Wendy Shay was, indeed, sacked.

But on its official Facebook page, the YEA said, “Wendy Shay has not been sacked as an Ambassador of YEA.”

Interestingly, she was missing in action when the YEA team paid a courtesy call on Okyehene Osagyefo Ammotia Ofori Panin after ex-President Kufuor's visit brouhaha.

This involves three flagship projects ‒ the YEA Job Centre which seeks to link job seekers to employers, the artisan directory project which is geared towards providing training to artisans in various fields and to offer them capital start-ups in order to start their own businesses and the regional and district projects, tailored towards the needs of the various communities.

The rest of ambassadors are Jackie Appiah, Bola Ray, Kwesi Arthur, Rebecca Donkor and a host of others.