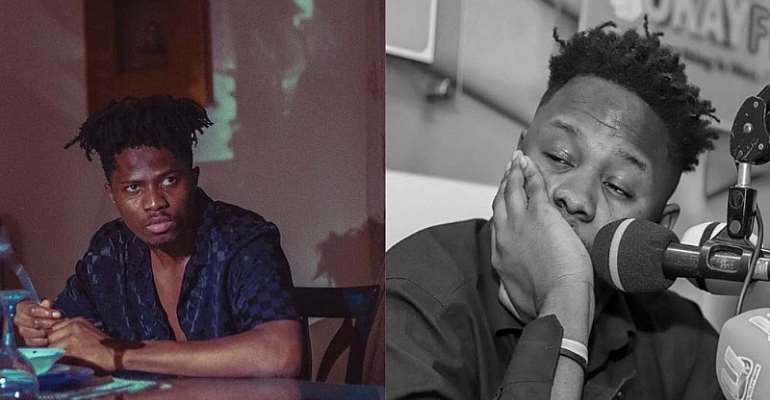 Controversially, aesthetically and poignantly Prince Benjamin has laid bare the stature and level that underpins the nature, substance and calibre of Ghanaian rap music, with regards to Kwesi Arthur and Medikal’s music stand points.

There is an on-going ‘Rap- Music- Controversies’ between two exciting and relevant artistes within the Ghana music’ landscape, and the Drive Time host of Class FM has waded into the argument with his love and knowledge of music.

Being in the radio industry for some time Prince Benjamin arguably knows a thing or two about the Ghanaian music industry in general.

In his assertion, Prince argues conversely and constructively by explaining some facts along some of his opinions that seek to attest the credibility of both Kwesi Arthur and Medikal.

Here are the denotations and connotations of the narrative according to the Class FM Drive Time host.

“I like Medikal because I find him entertaining. He makes you laugh with his silly or playful wordplay, flow and personality. He is like the boss when it comes to catchy phrases. However, he can drop a whole album and may still not be able to beat Kwesi Arthur at rap.

I am not hating I am telling you the facts as I see it esp. after his "Vamidjo" and "To Whom It May Concern". Remember he released these two after his GH Rap Saviour brag. Historically, he's not the saviour and with these two songs, the tweet just looks like a bluff.

Listen, Kwesi Arthur is bars and punchlines but beyond that he comes with a soul - he's not just playing with words - he's not playing. He is seriously speaking to you, telling you his stories and setting your heart aflame.

He's the rap Nkrumah - yes, I said it - no, he's been telling you for a while now but maybe you've not been paying attention (as usual). He wants to set you free to be more than you ever thought you could be and he's pointing at himself as a testimony.

He's the champion of the youth. He comes from a lineage of Tema stars and rappers who are not content with local fame and competition but want to shine glocally.

They are not just interested in GH hits - they want world acclaim. To do that, you need more than just words. You need a story and he has a story! A pretty inspiring story!

This is why Tupac is or was like a deity to many people. He hardly played with words. He had a struggle and a story (a cause). He was a human rights activist, if you will. He was serious and quite straight to the point in his music but he was charming and effective.

Biggie, was heavy on wordplay but he wasn't playing either. He was serious. Not throwing words about. He was sharing his struggle and story and inspiring people through these means. Think of Kendrick and Nipsey (RIP). Think of Obrafour and Sarkodie.

Hip-hop/Rap has never been about just wordplay. The genre and culture were designed as a tool to shape and free minds. It is like reggae. It is not just sounds and words. It is higher art. It entertains, yes, but that is just the means to achieving a purpose.

The aim is really to touch your soul and move you to a certain action that often goes against the status quo. Why do you think the greatest rappers were seen as poets and philosophers and sometimes called preachers or prophets?

Don't be confused. I am not saying Kwesi is better as an artist over Medikal. I am however saying Kwesi is a better hip-hop figure or rapper. Music artistry is a big thing. Hip-hop or rap is a subset and in that subset, currently as a significant number of your favourite rappers have already said, Kwesi Arthur is the King. Don't let anyone lie to you.

It's not about who has money or who has awards, it's neatly about who's so far shown rap prowess with their Hiphop work(s). If the originators of rap were to judge, I dare say Kwesi will come up tops again.

Medikal has his style and audience and he comes with his set of strengths and as time goes by there'll be opportunities to highlight those. For now, let's call a spade a spade. While we do that, also, we graciously make room for improvements for both artists when it comes to rap. I hope none of them loses guard.

This is not to incite disses or hate. It is clearly a competition that has been sparked and I am here to comment on the happenings and offer some perspective that may prove resourceful”.

In all, it is nice shedding some entertaining lights on their differences, similarities as well as their complexities.