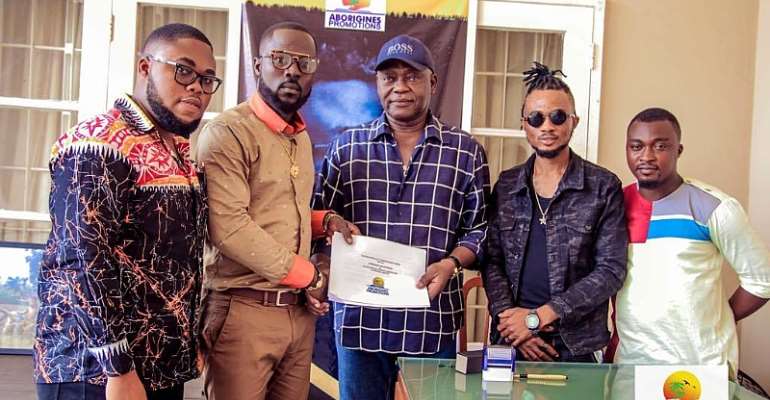 According to the Chief Executive Officer of Aborigines Promotions and Aborigines Beach Resort, Mitch Woollams the record label will work with Ghanaian Recording Artist, Entertainer and a Song writer for the next 5 years adding that, its going to be a 360 [business] relationship where the record label entity will be taking care of the recordings, distribution and marketing of the performer's products.

The signing of the "See Them Empire" President, was slated for 8th June, 2019 at the Aborigines Beach Resort Hotel, Keta, Volta Region. The signing bird-nest the presence of executive of ''See Them Empire'' movement, Gilbert Attipoe (Co-manager), Evans Kpodo (Public Relation Officer) and some mass communication traditional media, including newspaper, television and radio; journalist and other related professionals collectively.

Mr. Mitch Woollams stated that, perseverance, stage craft, consistency and the talent quality of the sensational singers are the factors of interest and motivation to sign him, since he has been under his monitoring lenses for the past 4 years.

Despite the monetary value of the five(5) years deal is agreed to be made unknown to the general public, Aborigines Promotion is taking a full responsibility of the artiste including accommodation for the entire contractual period.

Aborigines Promotions, known for promoting sporting event and now music, is focused on scaling operations to meet the rapidly growing international demand for African music, on growing its roster and on strengthening its services across A&R, touring, marketing, distribution, publishing and partnerships.

Aborigines Beach Resort is established in the early 2000s and can through series of expansion boast of 28rooms consisting of executive, twin and standard deluxe located in Keta, Volta Region of Ghana. The Hotel is situated within nice and well laid grounds with summer huts and contemporary style, capturing its original Elegance, luxury, and superb amenities. Machuca tiles form cool geometric patterns in the hallways. Hotel hardwood floors contrast modern furnishings and amenities in the dramatic suites. The Hotel lifestyle offers guests the finest sensory indulgences: soothing organic toiletries, heirloom recipes and unmatched privacy and tranquility.

Speaking to the Manager of JJ Gonami, Ekpe whose government name is Bernard Berko Asare, known for his enormous experience and contribution to the positive growth of Ghana's entertainment ecosystem and former member of Hammer's Last2 crew assured the CEO of Aborigines his total dedication to the work at hand and reiterating his allegiance and declared his unflinching solidarity to serve and elevate the brand.

Ekpe, however urged all mass communication traditional media to defy all odds to promote the undiluted talent and products of J.J Gonami, explaining that, the industry will see a positive growth, should media practitioners create a cool ambiance that will embolden all performing artistes to elevate the Ghanaian culture through music.

Sammi Awuku appointed as Director General of NLA
46 minutes ago