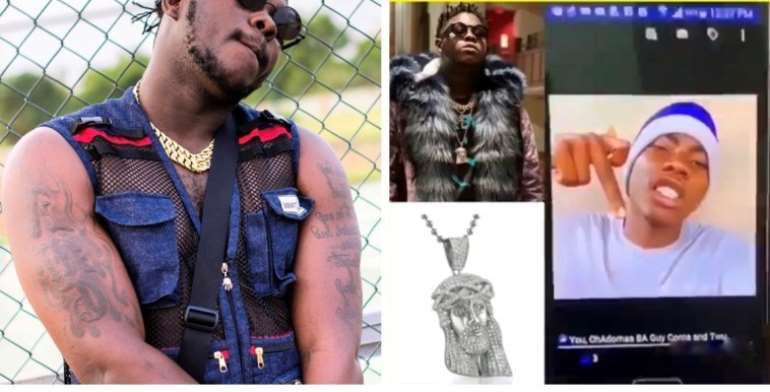 The 'Omo Ada' hitmaker, Medikal has managed to track down the thief who stole his Jesus chain dear to his heart.

The rapper lost his Jesus chain during a performance at Sunyani Technical University exactly a week today, in an event organised by Club Shandy.

The rich rapper promised to give away a whopping 10,000 US Dollars to anyone who can help bring the missing Jesus Peace Chain.

Within some few days, after his announcement some guys sighted in a video, claimed to have the chain in their possession but they did promised not to return it to him.

In a new video sighted by the“Father” hitmaker, he is seen showing a picture of a young guy and was heard asking his fans if they knew him because he was the one that snatched his precious chain.

Interestingly, days of continuous search seems to have yielded early result as Medikal has managed to track the thief that stole the Jesus chain.

Watch as Medikal tracks thief who stole his Jesus Chain