A Plus Fires Catherine Afeku 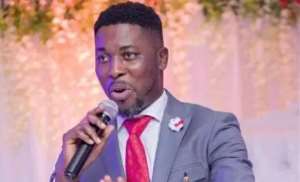 Controversial musician, Kwame A Plus has descended on the Tourism Minister, Madam Catherine Afeku for contributing to the AFRIMA awards recently held in Ghana.

According to the musician who doubles as a politician, he thinks it was wrong for Ghana to allegedly use 4.5 million dollars of taxpayers’ money to support a foreign concert when the Creative Industry is in dying need of funds to survive.

Speaking on Daybreak Hitz on Hitz FM, A Plus told Andy Dosty that “you spend 4.5 million dollars yet you don’t even have venues to hold concerts. The people who advised the President were wrong because who will advise the president to build a cathedral, why? People like Catherine Afeku don’t have any policy to do anything…”

“Who is AFRIMA? I hear it belongs to some Nigerians and some people. Otchere-Darko said he watched ten movies and was depressed. Shirly Frimpong-Manso has done so much to sustain the industry and you have a minister who brings AFRIMA here and they give you award to boost tourism? What are tourists coming to look for in Ghana? Motorway doesn’t even have lights. We have to keep our priorities right” he noted.

The African Union Commission (AUC) announced Ghana as the host country for the 5th All Africa Music Awards (AFRIMA), signed by the Honourable Minister of Tourism, Arts and Culture, Madam Catherine Afeku.

Aside Kwame A Plus, other industry players such as the President of MUSIGA, Obour, Bulldog, Kwesi Ernest, among others expressed worry over the AFRIMA deal.