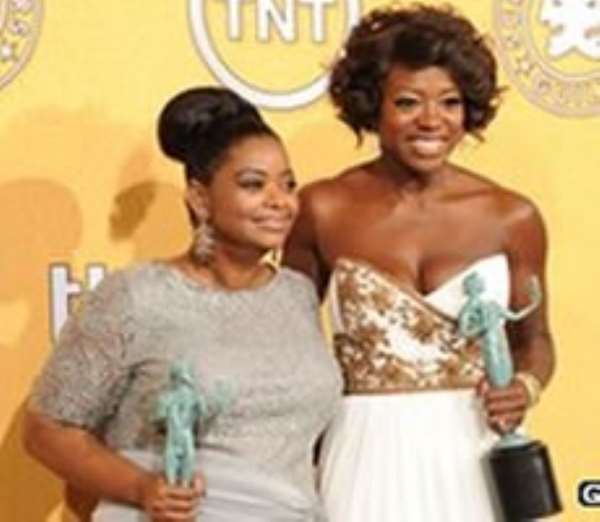 Another of the film's stars, Octavia Spencer, was named best supporting actress.

Silent movie The Artist, tipped for Oscar glory, could only manage one win, a best actor prize for Jean Dujardin.

The SAG awards are seen as a key indicator of which films and stars may come out on top at the Oscars.

Actors make up the biggest voting group in the Academy of Motion Picture Arts and Sciences, which picks the Oscar recipients.

Veteran Christopher Plummer was named best supporting actor for his portrayal of an elderly man who comes out to his family in Beginnners.

Paul Giamatti was named best actor in a TV film or mini-series for his role in Too Big to Fail, a drama about the 2008 financial meltdown.

Kate Winslet was named best actress for playing the title role in Mildred Pierce, having won the same award at the Golden Globes earlier this month.

The cast of Martin Scorsese's Boardwalk Empire picked up the TV drama ensemble prize, while its star Steve Buscemi was named best male actor in a drama series.

Jessica Lange was named best actress in a drama series for her role in American Horror Story.

Alec Baldwin won best actor in a comedy series for 30 Rock, while Betty White picked up the best comedy actress prize for Hot in Cleveland.

"I think they made a terrible mistake," White joked, adding that the prize belonged to all four female leads in the series.