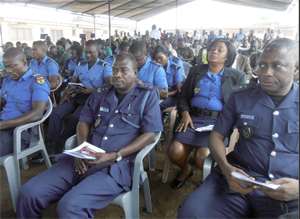 Stakeholders in the transport sector in Ghana, Togo and other ECOWAS countries on Thursday revealed that the rate at which unscrupulous customs, police and other operators extort bribes and delay vehicles at the borders is on the rise.

According to the transport operators, the security agencies often take them through opaque procedures and voluminous paperwork before they allow them to cross the borders.

Although specific figures could not be disclosed at the launch of West Africa's first border Information Centres at Aflao on Thursday, various speakers at the function noted that there are serious problems at most West African countries' borders that hamper trade.

The establishment of the Border Information Centre will assist traders to know the requirements which would lead to improved trading activities and transportation across the sub-region.

The core objective of the centre is to provide information for both the public and private sector operators on general rules and procedures. It will also facilitate border processing, reduce costs and delays and increase trade among ECOWAS states.

A report by Borderless Alliance noted that reducing West Africa's transport costs which are among the highest in the world, could significantly expand trade and lift millions of people out of poverty.

In a speech, Emmanuel Martey, Deputy Chief Executive Officer of the Ghana Shippers' Authority, indicated that 'a simple way to look at this is to see it as the simplification of border procedures especially cargo clearance and the reduction of transaction costs associated with the movement of goods from one country to the other.'

The Deputy Minister of Transport, Dzifa Attivor, on her part, commended officials of the USAID and West Africa Trade Hub (WATH) for bringing to the attention of government harassment transporters are subjected to.

She said the ministry would continue to offer the necessary support that will enable the agencies create the enabling environment for the transportation and border crossing formalities.

Hannah Tetteh, Minister of Trade and Industry, in a speech read on her behalf, said delays and the cost of crossing borders that are driven by the lack of readily accessible information about border procedures are significantly discouraging trade in West Africa.

'This new initiative provides business with information and assistance to cut through the red tape and make trade happen.'

'We should all take advantage of the centre to educate ourselves accordingly especially importers, exporters, freight-forwarders, customs, immigration and police offices.'

The Deputy Chief of Mission, Ellen Thorburn of the U.S Embassy to Togo, noted that reducing the delay at the border by just an hour would mean increase in trade and jobs in West Africa.

The Ghana Shippers' Authority and the Abidjan-Lagos Corridor Organization are hosting the centers.