The UN Charter and Decolonization: the case of Techiman and Tuobodom 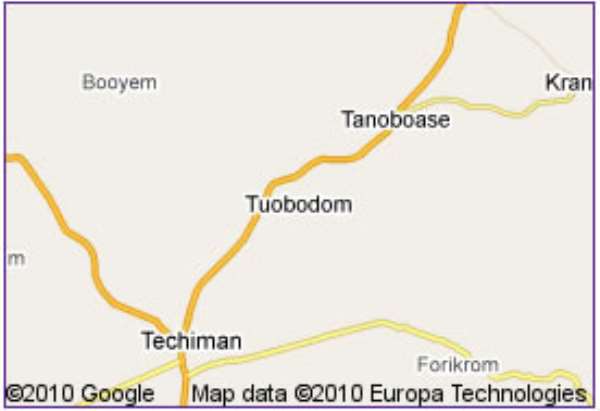 By Solomons Djaba-Mensah.
Among the cardinal principles adopted in the Atlantic Charter after World War II, which also led to the formation of the UN in 1945, was that of Self-Determination, for all countries under colonial rule.Colonialism was seen as the next major threat to the free world, after the defeat of Nazi Germany, and her Allies. Many soldiers from the colonies(including GoldCoast soldiers) fought alongside the Allied Powers for victory over Hitler and his vanquished Allies, so the principle enshrined in the Charter, was a re-assurance of hope of freedom for their colonies, one day.

In pursuance of this UN Charter Objective, the World Organization made it a conscious agenda to ensure that all colonies gained Independence from colonial rule. The UN set up the Decolonization Committee, which was empowered to operate like a full Organ of the UN in this direction.

This Decolonization Committee worked tirelessly, and vigorously, to ensure that Colonialism, IN ALL FORMS, was uprooted everywhere in the civilized world. It was the new thinking after World War II, that Self- Determination, would free colonies from the yoke of olonialism, and bring them hope, and progress. Self- Determination, was also considered to be the only way that all traces of forced occupation, suppression, and oppression, which Hitler and his Allies sought to re-introduce, on a much dangerous scale, would be uprooted from the liberated world.

Soon after the adoption of this International Charter, Ghana's Intelligentsia, the Politicians, the Ex-Servicemen from the last War, Our Workers, even Women and the Youths, etc, quickly took advantage of the UN Charter, and worked together as One Country, One People, with a Common Destiny, to struggle to gain Independence from Gt. Britain------the very first sub-Saharan African colony to free itself, from Colonial rule.

Many African countries followed Ghana's example and gained Independence, peacefully, this way , with the backing of the UN Charter. Ghana went ahead to gain Republican status, and thereby 'remove' traces and vestiges of Colonial rule, from its body politics.

A form of Colonialism which the UN Decolonization Committee found difficult to deal with, was that found in South Africa. In South Africa, the Colonial Power was resident in South Africa itself. The Minority whites had declared a type of 'Independence', way back in 1908, where they practised a Colonial system called Apartheid. It was based on Discrimination, and Separate Development.

No matter the recalcitrance of the Apartheid leaders, the UN Decolonization Committee, with the support of the international community, and the progressive world, never relented in its efforts at uprooting any traces of colonialism from the modern world. Consequently, South Africa's form of Colonialism also crumbled to Majority Rule in 1994.

Generally, it is considered that the independence of South Africa almost closed the chapter on Colonialism, because of the dissolution of the powerful UN Decolonization Committee earlier. However, the UN did not hesitate in dealing expeditiously with all traces of colonialism, wherever it reared its ugly head

Before he left office, our own Busumuru Kofi Annan, the former UN Secretary-General, stepped in to broker landmark Independence arrangements for some countries in the Mediterranean, and Indian Ocean. Such interventions brought peace and development to those countries.

Available information in the public domain on the Techiman- Tuobodom impasse copiously reveal that relics of British Colonial rule policy exist. The British practised the Indirect Rule Policy. This Policy used powerful traditional local institutions, such as Chieftaincy, as an engine for local government ,in the Colonial administration.

In practice, some communities considered ( 'difficult' to administer ), were placed under strong traditional institutions, who held them in check to suit the Colonial Power. These traditional institutions, especially Chieftaincy, made colonial administration appear, at the local level, as if they came directly from the British Governor's administration . In so doing, Britain was able to sustain its Indirect Colonial Rule machinery in the then Gold Coast , for well over a hundred years.

This Indirect Rule Policy was first used much successfully, in Northern Nigeria, and Uganda. Thereafter, it was used in Ghana, and in most parts Britain's colonial empire, where it was found useful. A very close observation reveals that the enclave of the Tuobodom township in dispute, closer to Techiman, but far away from Kumasi, is a relic of the British Indirect Rule system.

There is also evidence that some chiefs in Volta, Central, and Brong Ahafo regions, owe allegiance outside their regions, in Republican Ghana, as a result of either British Colonial rule, War, Settlement, Conquest during Slave Raids, or otherwise. These are all relics and vestiges of our colonial past, which the UN Decolonization Committee dealt with, with the backing of the UN Charter of 1945 .

In Ghana, when the External Colonial Power, Britain, was replaced in 1957, some mechanisms of the Indirect Rule System used by these traditional institutions ( Internal Agents, or Collaborators), were virtually not dismantled nor touched. So, vestiges, or forms of British Colonial Rule System exist, and the UN Charter is sharply brought into question, and focus.

Such a situation clearly undermines our Republican Constitution, and Status. It is a situation which borders directly on our sovereignty as a Republican State. If a portion of a Region in a Republic owes allegiance to another authority outside its territorial boundary, then the autonomy of that Region in a Republican State is compromised, undermined, and threatened, by such relics ! This is not a Chieftaincy matter, or dispute. I say, very strongly, that this is a clear case for the State. And the time has come for an honourable, peaceful, and a dignified, resolution of all such pockets of cases in Republican Ghana, in accordance with the UN Charter.

Before the beginning of World War II, in 1939, Britain, our Colonial Master, had the largest chunk of colonies dotted around the world. In Africa, France had the biggest in number of colonies. Spain, Portugal, Belgium, etc, all had colonies in Africa, and around the world. But, significantly, all these Colonial Powers swallowed their pride, as well as the prestige that went with the 'accolade', Colonial Master. They respected the UN Charter, and granted Independence to their colonies, in the supreme interest of World Peace. In return, these countries retained their dignity and respect, intact, among the comity of nations.

In Ghana's case, it will be imperative for the Asantehene to honourably, and gracefully, ' grant independence' to all such states outside the Ashanti Region, in due respect to the UN Charter, within the context of the Republican State of Ghana, and in the supreme interest of peace, stability, and progress, in the modern state of Ghana. The old structural state arrangement called the Gold Coast, shed its colonial clothes in 1957, at independence, and gave way finally to a Republican State, in 1960.

The way forward! We should do this through dialogue, negotiations, and diplomacy. Local Government, and Constitutional Experts should stand up and be counted. Our Elder Statesmen , Politicians, and Eminent Chiefs should join hands for an amicable resolution of all issues raised. References can be made to the Foreign And Commonwealth Office, where need be. We should approach this with an open mind. There should be neither Victor nor Vanquished. Mother Ghana should be the winner!

All the Colonial Powers voluntarily relinquished all claims and hold on their colonies, and gracefully left. I think we in Ghana should be able to resolve this impasse in a mature way, without recourse to the UN Organization. There's no need for any group to appeal to the UN to step into this matter ! We should have faith in ourselves. We have come a long way in our 53-year history.

The Champion of Africa's De-colonization, Freedom and Emancipation itself, Osagyefo Dr. Kwame Nkrumah, of blessed memory, a Ghanaian, started it all from our shores. At the same time, the immediate-past UN Secretary-General, Kofi Annan, who was honoured by the title, BUSUMURU, by the Asantehene, for bringing honour to Asanteman, and Ghana at large , who has the UN Charter at his finger tips, and who has cris-crossed the whole world with the message of peace, freedom ,and decolonization, is a Ghanaian by birth. We have the men, and history beckons us.

Our Colonial Power, Britain, respected International Law, granted us Independence, and left with dignity. How about us? Busumuru Kofi Annan and Others, you've done it elsewhere! Over to you. I end.