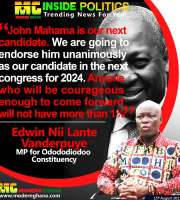 THE LEGISLATURE
93 Composition of Parliament
(1) There shall be a Parliament of Ghana which shall consist of not less than one hundred and forty elected members.
(2) Subject to the provisions of this Constitution, the legislative power of Ghana shall be vested in Parliament and shall be exercised in accordance with this Constitution.
94 (1) Subject to the provisions of this article, a person shall not be qualified to be a member of Parliament unless -
(a) he is a citizen of Ghana, has attained the age of twenty-one years and is a registered voter;
(b) he is resident in the constituency for which he stands as a candidate for election to Parliament or has resided there for a total period of not less than five years out of the ten years immediately preceding the election for which he stands, or he hails from that constituency; and
(c) he has paid all his taxes or made arrangements satisfactory to the appropriate authority for the payment of his taxes.
(2) A person shall not be qualified to be a member of Parliament if he -
(a) owes allegiance to a country other than Ghana: or
(b) has been adjudged or otherwise declared-
(i) bankrupt under any law in force in Ghana and has not been discharged or
(ii) to be of unsound mind or is detained as a criminal lunatic under any law in force in Ghana; or
(c) has been convicted -
(i) for high crime under this Constitution or high treason or treason or for an offence involving the security of the State, fraud, dishonesty or moral turpitude; or
(ii) for nay other offence punishable by death or by a sentence of not less than ten years; or
(iii) for an offence relating to, or connected with election under a law in force in Ghana at any time; or
(d) has been found by the report of a commission or a committee of inquiry to be incompetent to hold public office or is a person in respect of whom a commission or commitee of inquiry has found that while being a public officer he acquired assets

unlawfully or defrauded the State or mis-used or abused his office, or willfully acted in a manner prejudicial to the interest of the State, and the findings have not been set aside on appeal or judicial review; or
(e) is under sentence of death or other sentence of imprisonment imposed on him by any court; or
(f) is not qualified to be registered as a voter under any law relating to public elections; or (g) is other wise disqualified by a law in force at the time of the coming into force of this Constitution, not being inconsistent with a provision of this Constitution. (3) A person shall not be eligible to be a member of Parliament if he - (a) is prohibited from standing election by a law in force in Ghana by reason of his holding or acting in an office the functions of which involve a responsibility for or are connected with the conduct of, an election or responsibility for, the compilation or revision of an electoral register; or
(b) is a member of the Police Service, the Prisons Service, the Armed Forces, the Judicial Service, the Legal Service, the Civil Service, the Audit Service, the Parliamentary Service, the Statistical Service, the Fire Service, the Customs, Excise and Preventive Service, the Immigration Service, or the Internal Revenue Service; or
(c) is a Chief. (4) For the purposes of paragraph (d) of clause (2) of this article, in the case of any finding made by a commission or committee of inquiry which is not a judicial or quasi-judicial commission or committee of inquiry, without prejudice to any appeal against or judicial review of that finding, the finding shall not have the effect of disqualifying a person under that paragraph unless it has been confirmed by a Government white paper. (5) A person shall not be taken to be disqualified to be a member of Parliament under paragraph (c) or (d) of clause (2) of this article if - (a) ten years or more have passed since the end of the sentence or the date for the publication of the report of the commission or committee of inquiry; or
(b) he has been pardoned.
95 (1) There shall be a Speaker of Parliament who shall be elected by the members of Parliament from among persons who are members of Parliament or who are qualified to be elected as members of Parliament.
(2) The Speaker shall vacate his office -
(a) if he becomes a Minister of State or a Deputy Minister, or
(b) if he resigns from office by writing signed by him and addressed to the Clerk to Parliament; or
(c) if any circumstances arise that, if he were not Speaker, would disqualify him for election as a member of Parliament; or

(2) A member of Parliament may, before taking the oaths referred to in clause (1) of this article, take part in the election of the Speaker.
101 The Speaker shall preside in Parliament at all sittings and in his absence a Deputy Speaker shall preside.
102 A quorum of Parliament, apart from the person presiding, shall be one-third of all the members of Parliament.
103 (1) Parliament shall appoint standing committees and other committees as may be necessary for the effective discharge of its functions.
(2) The standing committees shall be appointed at the first meeting of Parliament after the election of the Speaker and the Deputy Speakers.
(3) Committees of Parliament shall be charged with such functions, including the investigation and inquiry into the activities and administration of ministries and departments as parliament may determine; and such investigation and inquiries may extend to proposals for legislation.
(4) Every member of Parliament shall be a member of at least one of the standing committees.
(5) The composition of the committees shall, as much as possible, reflect the different shades of opinion in Parliament.
(6) A committee appointed under this article shall have the powers, rights and privileges of the High Court or a Justice of the High Court at a trial for -
(a) enforcing the attendance of witnesses and examining them on oath, affirmation or otherwise;
(b) compelling the production of documents; and
(c) issuing a commission or request to examine witnesses abroad.
104 (1) Except as otherwise provided in this Constitution, matters in Parliament shall be determined by the votes of the majority of members present and voting, with at least half of all the members of Parliament present.
(2) The Speaker shall have neither an original nor casting vote.
(3) Where the votes on any motion are equal it shall be taken to be lost.
(4) Where Parliament is considering a bill to amend the Constitution, or where the voting is in relation to the election or removal of any person under this Constitution or under any other law, voting shall be in secret.

(5) A member who is a party to or a partner in a firm which is a party to a contract with the Government shall declare his interest and shall not vote on any question relating to the contract.
105 A person who sits or votes in Parliament knowing or having reasonable grounds for knowing that he is not entitled so to do commits an offence and shall be liable on conviction, to such penalty as shall be prescribed by or under an Act of Parliament.v
106 (1) The power of Parliament to make laws shall be exercised by bills passed by parliament and assented to by the President.
(2) No bill, other than such a bill as is referred to in paragraph (a) of article 108 of this Constitution, shall be introduced in parliament unless - (a) it is accompanied by an explanatory memorandum setting out in detail the policy and principles of the bill, the defects of the existing law, the remedies proposed to deal with those defects and the necessity for its introduction; and
(b) it has been published in the Gazzette at least fourteen days before the date of its introduction in Parliament.
(3) A bill affecting the institution of chieftaincy shall not be introduced in Parliament without prior reference to the National House of Chiefs
(4) Whenever a bill is read the first time in Parliament, it shall be referred to the appropriate committee appointed under article 103 of this Constitution which shall examine the bill in detail and make all such inquiries in relation to it as the committee considers expedient or necessary.
(5) Where a bill has been deliberated upon by the appropriate committee, it shall be reported to Parliament.
(6) The report of the committee, together with the explanatory memorandum to the bill, shall form the basis for a full debate on the bill for its passage, with or without amendments, or its rejection, by Parliament.
(7) Where a bill passed by Parliament is presented to the President for assent he shall signify, within seven days after the refuses to assent to the bill, unless the bill has been referred by the President to the Council of State under article 90 of this Constitution.
(8) Where the President refuses to assent to a bill, he shall, within fourteen days after the refusal -
(a) state in a memorandum to the Speaker any specific provisions of the bill which in his opinion should be reconsidered by Parliament, including his recommendations for amendments if any; or
(b) inform the Speaker that he has referred the bill to the Council of State for consideration and comment under article 90 of this Constitution.