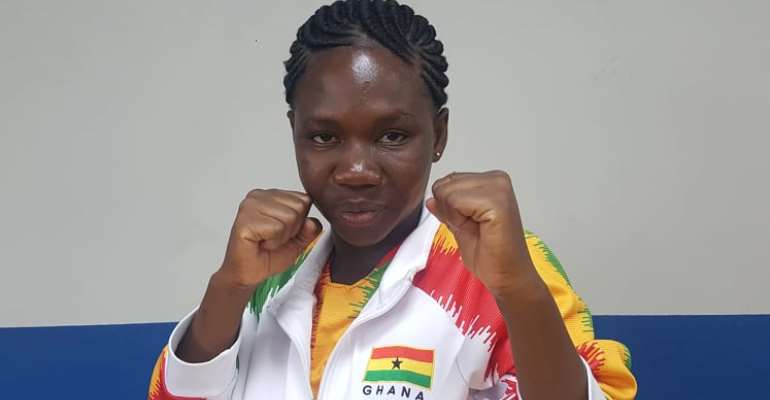 The two female boxers who represented Ghana at the Olympic Games Boxing qualifiers in Dakar, Senegal believe they can do better if they are fully supported by the sports authorities in Ghana.

Dr. Ornella Sathoud and Faruiza Osman said on the international women’s day that if more females had been entered for the Olympic qualifier, they could have done better, because looking at the ratio, eight males and two females represented the nation and out of the three bronze medalists was one female.

Dr. Sathoud missed the direct qualification when she lost 0-5 to Gramane Rady Adosinda of Mozambique in the middleweight division at the semi final stage. She called for better communication between the boxers and officials, as well as transparency and equal remuneration.

Faruiza Osman, a female recruit of the Ghana Armed Forces also failed to qualify in her first international experience due to lack of exposure and familiarity, but she thanks God and the Ghana Boxing Federation (GBF) the opportunity, and believes she can perform better in the future.

According to coach Dr. Ofori Asare, the Ghana national team has 11 female boxers, but only two went for the 2020 Olympic qualifier for African nations in Senegal, because they were given two slots.

Some of the female bombers boxers are Barikisu Sunday, Sarah Botchway, Mariam Mohammed, RamanAbroh, Abigail Quartey, Liticia Amanua, TrudyManteaw, Sarah Apau and Ramatu Quaye who has given birth to a bouncing baby.

Abigail Quartey who has represented Ghana at the African Games thinks they can excel if given the chance, because she prepared for the Dakar qualifiers but was dropped due to the minimum slots.

Meanwhile, Yarkor Chavez Annan, the veteran female boxer aka the trail blazer has appealed to the Ministry of Youth and Sports to support and encourage girls who want to box.

She also praised the Black Bombers who have qualified to Tokyo 2020, and dedicated coaches who assist Dr. Asare, namely Quaye aka Akpetanor, Vincent Akai Nettey and Lartequaye Lartey.

Other coaches who have been training female boxers are Charles Quartey and Zico, all of them are based at James Town, the cradle of boxing in Ghana.

‘We Won’t Tolerate LGBTQ+’ —Ga Chiefs back criminalization b...
54 minutes ago