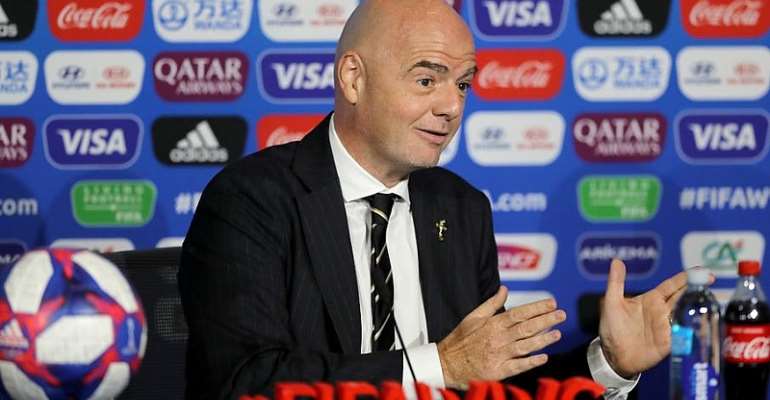 Fifa president Gianni Infantino has said that football will be "totally different" when it re-starts after the coronavirus. He has talked of smaller, but more meaningful, competitions, more balance and football being "more attentive to true values."

Infantino has not yet gone into further details and some may question his credentials in this matter: as Fifa president, he has increased the World Cup from 32 to 48 teams and, in a previous role as Uefa general secretary, oversaw growing financial inequality in European football.

Recent talks and meetings have provided some clues as to what the future could hold. Here are some possibilities:

International matches are played in several short windows which are seen by some as an unwelcome intrusion into the club season.

An alternative would be to concentrate them into one or two longer windows per season.

This would give national team coaches more time to train their squads, which could, in turn, improve the quality of matches – often compared unfavourably to club games – and could reduce long-haul travel for the players.

Meanwhile, there is a growing sentiment that the Africa Cup of Nations and the CONCACAF Gold Cup should be held every four years instead of two.

Infantino's most ambitious project is to "bring at least 50 national teams and 50 clubs from all continents to a top competitive level."

Fifa hopes to do this by launching a new global development programme and new global competitions such as the 24-team Club World Cup, which was due to start in 2021 but has been postponed because of the coronavirus.

"We need 50 clubs that can win the Club World Cup, not just five or six European ones. And 20 of these 50 will be European, which seems better than today's five or six," said Infantino.

Cross-border leagues, until now frowned upon by Fifa, could help by giving more growth opportunities for clubs limited by small internal markets.

Earlier this year, Infantino himself proposed a 20-team Pan-African league which he said could give clubs a chance to grow and encourage African players to stay on the continent rather than move to Europe.

New transfer regulations, currently being worked on, could also help if they succeed in limiting the astronomical fees – even average international players are currently unaffordable for most African and South American clubs – and prevent big clubs from hoarding players.

For a glimpse of what new formats could look like, the CONCACAF World Cup qualifiers for 2022, featuring a highly unconventional system, offers a sneak preview.

The 35 teams have been divided into two sections, according to their Fifa rankings. The top six-ranked teams take part in a mini-league – the Hexagonal – where the top three qualify for the World Cup.

The remaining 29 teams were sent into the "lower-seeded" section where they are split into eight groups, followed by a knockout stage with the eventual winners to meet the fourth-placed team from the Hexagonal in a playoff. The winners of that tie go into an intercontinental playoff.

"This new format makes every competitive match count," said CONCACAF president Victor Montagliani – although it could be seen as highly unfair on teams who just miss out on the Hexagonal in the first place.

Meanwhile, Uefa's Nations League has proved an unexpected success as it pits teams against opponents of the same standard in small groups – unlike the region's qualifying competitions which consist of notoriously bloated, unbalanced groups and too many one-sided games.

On the domestic front, 22 of Europe's 54 leagues now use a variety on the playoff system, rather than conventional format, to avoid teams running away with the title.

At club level, the European Club Association (ECA) has often spoken of reducing the size of first divisions, which include up to 20 teams in several larger countries.

Axing domestic cups may be an attractive proposition in countries such as Italy, where the Coppa Italia is actively designed to avoid upsets, but less so in other countries where they are still seen as a chance for giant-killing.

A radical idea which has been discussed by FIFPRO would be to limit the number of matches players can play in a season – but not clubs. This would allow bigger clubs to play year-round and go on lucrative tours abroad, though the amount of squad rotation it would require could prove a headache for coaches.