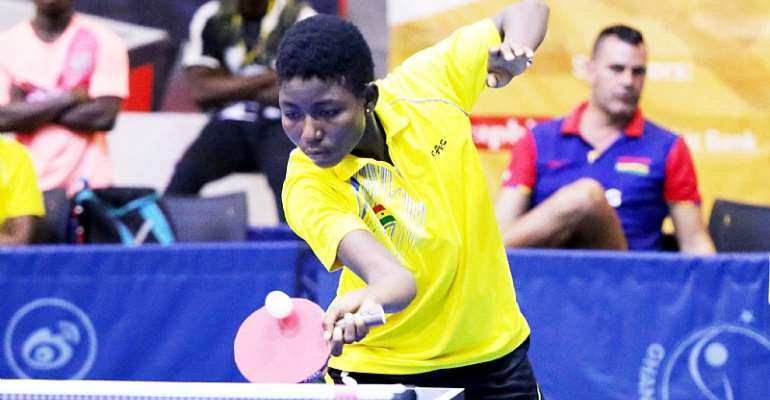 Talented at sport, Matilda Fodu, 16 years old, was a member of the Ghanaian team at the 2019 African Junior and Cadet Championship held in Accra.

Currently, she is enjoying the best moments of her life; she has fulfilled her dream of being called up to the Ghanaian national table tennis women’s under 17 years team by Baba Nuhu, the national coach.

In Accra, she showed great promise but is somewhat torn between table tennis and football, the senior class two student of Keta Senior High School in the Vottal Region has also been selected for the Ghanaian national women under 17 football team.

Recently, on Sunday 1st March, the 16-year-old made her debut for the Black Maidens in the FIFA Under 17 World Cup Qualifiers again Liberia; a diminutive midfielder, she dazzled.

“I love table tennis a lot because it has afforded me the chance to wear the national colours of Ghana. Now I am also in the colours of the national team in football. This for me is a big achievement and my dream of becoming one of the best footballers in Ghana is getting closer but I cannot dump table tennis because I have met a lot of friends playing the game and the atmosphere in Ghana has helped me to display my talent in the game.

I want to play as a professional be it in table tennis or football. I am so excited that I am part of the table tennis national junior team; it is a great honour to represent my country in an international competition. However, I am still hoping that I can make the under 17 football team at major tournaments.” Matilda Fodu.

Sport for Matilda Fodu who plays for Ideal Ladies FC, comes natural; she is poised to pursue a career in sport but which one?