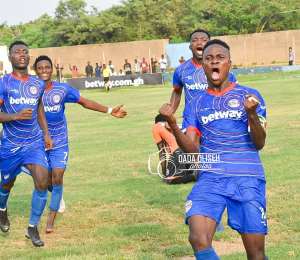 In a Match Week 10 fixture of the Ghana Premier League season between Liberty Professionals and Aduana Stars, Yahaya Mohammed bagged a brace but it was not enough to save his side from a heavy defeat.

A clash which proved pulsating throughout the entire 90 minutes produced 7 goals with Liberty Professionals coming from behind twice to eventually cruise to a 5-2 win.

The visitors took the Dansoman Carl Reindorf by storm as they broke the deadlock after just 11 minutes of action. It was no other person than their talisman Yahaya Mohammed who continued his fine form in front of goal.

Soon after that equalizer, Liberty Professionals replied when Alhassan Mubarak drew level for the side. From there, the goals could not stop coming as Yahaya Mohammed found the back of the net again on the 25th minute to restore the lead for Aduana Stars.

Four minutes later, experienced attacker Elvis Kyei Baffour converted a penalty to level the scores for the Scientific Soccer Lads to ensure they went into the break with a good chance of earning 3 points at the end of the 90 minutes.

An improved performance from Liberty made nonsense of the performance of Aduana Stars, paving way for 3 additional goals for coach David Ocloo’s men.

Goals from Alhassan Mubarak, Nuhu Abass, and Elvis Kyei Baffour completed a resounding 5-2 win for Liberty Professionals at the end of the day to hand the side vital 3 points that have improved their standings on the League table.

They are now placed 12th on the table and 5 points behind the team on top of the pile.

Allowance For Workers Who Lost Job Due To Covid-19 — Mahama ...
1 minute ago

Ghana Back To HIPC Not Surprising, Spending 46% Of Tax Reven...
19 minutes ago