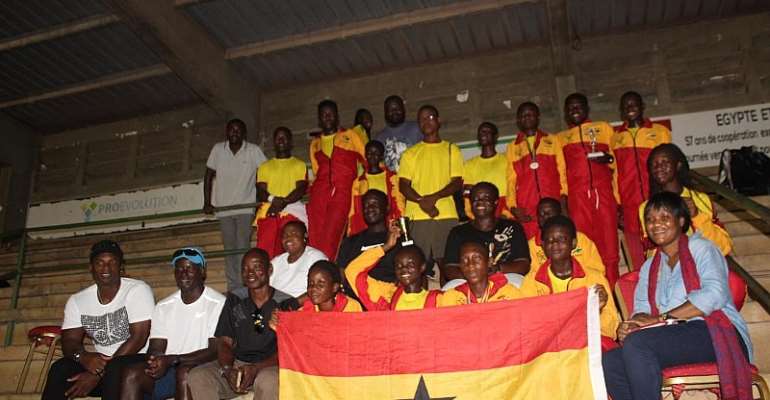 The Under-14 boys won their category with a comfortable 3-0 victory over Togo on Monday. Lameck Bagerbaseh of University Practice School Cape Coast, Abubakari Yakubu-Lea of St. John’s Grammar- Achimotta and Raphael Nii Ankrah of Uncle Rich School Winneba pulled together strings of superb performances to clinch Gold and secure qualification to the African Junior Championships Finals, which will be held in Madagascar. In the Boys U16 category, Richard Okine of St. Magarate Mary Senior High School-Dansoman, Ishmael Nii Nortey Dowuona of St. Thomas Aquinas School, Cantoment, and Desmond Ayaaba of Ideal College-Madina, secured 2nd place after the winners Nigeria.

In Tuesday’s action, the Under-14 girls made of Shika Mckorley of Morgan International School, Sisu Tomegah of East Airport international school and Tracy Ampah of Umat Basic School lost their final tie to Nigeria 3-0 and finished fourth in their category, while the Under-16 Girls, comprising Sekina Adam, Yayrah Komashie and Lawrencia Manu of Tema Secondary School ended their team campaign on a good note with a 3-0 victory over Sierra Leone. The girls also finished fifth in their category.

Only the Boys Under-14 team secured qualification to the main African Junior Championships slated for April, given their top-place finish in their category.

Coach Noah Bagerbaseh, who led the team alongside Coaches Richard Ayi Dartey and Yayha Macauley with support from some players parents such as Mrs Naomi Fummey, Mrs Abigial Mckorley, Mr William Ampah and Mr Seth Nii Noi Dowuona, noted that the players performance at the event was encouraging and despite the shortcomings, they were still able to “give other countries a run for their money.”

Countries that featured in this year’s Championship qualifier include Ghana, Nigeria, Benin, Cameroon and Congo