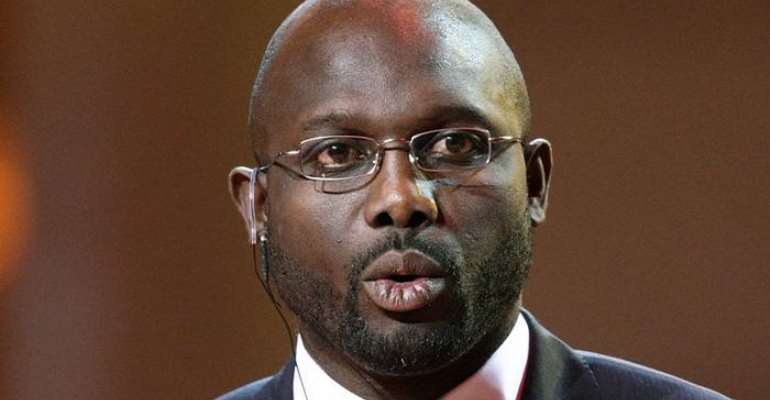 The President of the Republic and Africa’s only Ballon d’Or is encouraging young African footballers not to rest until they conquer the world and snatch the profession’s most prestigious award, the Ballon d’Or.

President Weah said contemporary African soccer players continue to demonstrate superb skills, performing incredibly in various leagues around the world but needed to break the record by winning the Ballon d’Or after him.

He remains the only African footballer to have won the European and World Best awards in addition to winning Africa’s Best multiple times.

Dr. Weah, once referred to as King George in France for his mesmerizing and formidable football skills, congratulated Senegal’s Sadio Mane for lifting CAF’s 2019 Footballer of the Year Award.

He also applauded the runners up Mohamed Salah and Riyah Mahrez of Egypt and Algeria respectively.

Dr. George Manneh Weah says Africa has a huge vault of talents and potentials to once more make history by winning Football’s most prestigious award, the Ballon d’Or or World Best and by conquering Europe.

The Continent’s Football governing body, CAF, held its 28th awards night on January 7, 2020, in the Egyptian City of Hurghada.

The Liberian Leader, three times African Footballer of the Year and Africa’s Soccer Legend was invited to the ceremony by CAF.

The Former World’s Best, Europea’s Best and Africa’s Best was represented at the award ceremony by Liberia Football Association (LFA) Executive Committee member, Pepci Quiwu Yeke who conveyed his commitment to CAF during the awards.

President Weah thanked the President of CAF, Ahmad Ahmad, and the entire Executive Committee of the federation for inviting him and at the same time according his proxy, Mr. Yeke due courtesy.

Dr. Weah promised to work with CAF in promoting football and helping to develop young talents to ascend to the bigger stage of the profession.