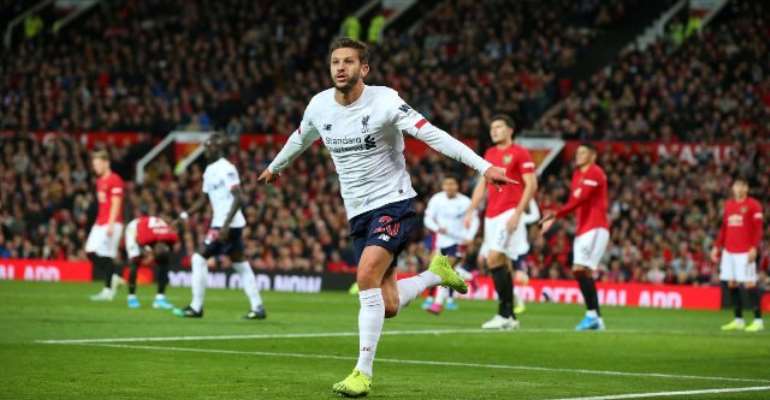 Adam Lallana came off the bench to rescue a point as Liverpool's 100 per cent start to the league season came to an end following a 1-1 draw with Manchester United at Old Trafford.

The midfielder has struggled to make an impact for the Merseysiders in recent times but provided a timely reminder of what he can offer with a simple tap-in five minutes from the end to notch for the first time since May 2017.

It was harsh on United, who had been the better side for long spells. Marcus Rashford grabbed a controversial opener on 36 minutes when he tucked home Daniel James's superb cross after Victor Lindelof had appeared to foul Divock Origi in the build-up.

Despite a VAR check, the goal stood and Jurgen Klopp was left fuming even more just before the interval when Sadio Mane had a strike chalked off following a review for a hand ball.

The visitors will point to issues with VAR, but in truth, they were far from their best and clearly missed the injured Mohamed Salah in attack. They never looked like equalling Manchester City's record run of 18 consecutive league wins but will be content with a fortunate draw that leaves them six points clear at the summit.

As for United, the performance was the perfect tonic for the under-fire Ole Gunnar Solskjaer, but once again they failed to see it out from a winning position, leaving them down in 13th spot.

Both sides will now focus on non-domestic affairs, with Liverpool visiting Genk in the Champions League on Wednesday and United away to Partizan Belgrade in the Europa League.

A prima facie determination as a pre-condition for removing ...
3 minutes ago