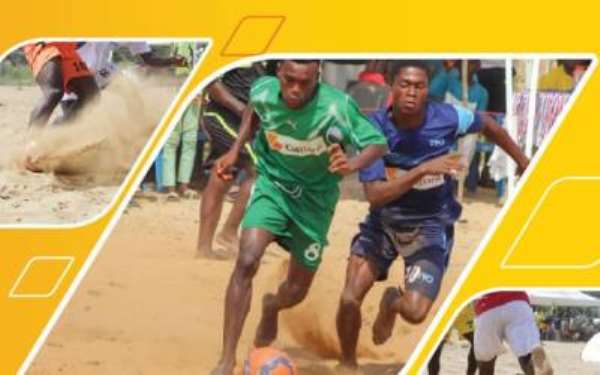 CAL Bank Ghana has announced a GHc 150,000 package for the upcoming National Beach Soccer League scheduled to kick off shortly.

And to renew their commitment to the growth and development of the sport, the financial institution, is also making available $100,000 to the Ghana Beach Soccer Association (GBSA) in support of national team assignments.

These were announced in Accra on Thursday at the media launch of the 2019 Beach Soccer National League which will have CAL Bank as the official headline sponsor of the competition.

The event was held at the head office of the bank and, Kofi Siaba who spoke on behalf of the hosts, said, his outfit is committed to the development of the sport at all levels and will continue to support the GBSA in its efforts to put the discipline at par with football in the country.

Mr Siaba added: ''We will support the building of a beach soccer arena in Ghana'', he, however, stressed that some commitments and efforts must first be made by the Ghana Football Association (GFA) and it's affiliate body, the GBSA to that effect.

The GBSA become an official member of the GFA on September 5, 2019, when it was incorporated to be part of the body that runs football in the country.

Prior to that, the GBSA had been running activities on its own and faced some challenges in funding its operations including supporting the national team to international competitions.

Chairman of the GBSA Yaw Ampofo-Ankrah thanked CAL Bank for their continuous support over the years and appealed for more support form other corporate bodies as they seek to put Ghana beach soccer on the world stage.

The 2019 National Beach Soccer League will feature 16 teams who have been drawn into four groups of four teams each with the top two in each group expected to qualify to the quarter-finals.

The league will run for a five-week period between September 30 and November 1 and, will be played at four venues in the Greater Accra, Central, Western and Volta regions.