Inside The Liberty Academy: The Talent Factory That Shaped Ghana’s Finest Talents 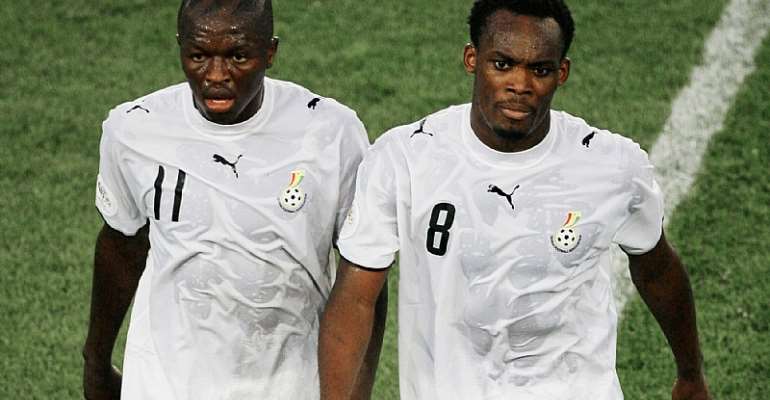 It took just under two minutes for Asamoah Gyan to open the scoring for Ghana. The striker, just 20, exhibited great control with his chest before firing a low left-footed shot past goalkeeper Petr Čech. The Czech Republic were the opponents and the Black Stars were on their way to recording their first-ever win at the World Cup.

After 82 minutes of an intense, end-to-end encounter, the West Africans sealed the result with an all-important second, thanks to a net-busting finish from midfielder Sulley Muntari. The game eventually ended 2-0, Ratomir Dujković’s side claiming a historic victory on the world stage.

As over 5,000 Ghanaian supporters – clad in regalia of red, gold and green – went berserk inside the RheinEnergieStadion in Cologne, celebrations on the streets of Accra were equally in overdrive. The Amalisa Gardens, a local pub located around the Karl Reindorf Park in the Ghanaian capital, was the perfect place to be.

A group of youngsters from the Liberty academy had put that day’s training session on hold in order to catch a glimpse of the Black Stars’ exploits. Barefooted, boots tied to their necks and hands up in the air, the ecstasy of these youngsters could not be quantified.

The 2-0 triumph over the Czech Republic – then placed second, behind only Brazil, in the FIFA world rankings – was special to these kids for two reasons. First, it represented a new dawn for Ghanaian football as the 2006 World Cup was the country’s debut appearance at the global showpiece. Furthermore, these youngsters had just watched two graduates from their academy, Gyan and Muntari, make their marks on the biggest platform football could offer.

The aforementioned duo are just two of the numerous players the Liberty academy has nurtured who have gone on to become international stars. Ghana’s squad for the 2006 World Cup had six players honed at the local football farmhouse, four of whom were in the starting line-up that faced Čech and co.

Aside from Gyan and Muntari, a young Michael Essien also started in midfield, while the assured John Paintsil, who would go on to play for Premier League sides West Ham and Fulham, also featured at right-back. Derek Boateng and Emmanuel Addoquaye Pappoe – also graduates of Liberty – were on the bench for that tournament in Germany.

Situated in Dansoman in the southern part of Accra, the academy is an offshoot of Ghanaian top-flight side Liberty Professionals. Over the last two decades, few academies in West Africa can claim to rub shoulders with Liberty when it comes to churning out of established football stars. The factory has been the main supplier of players for Ghana’s various national teams – from under-17 level to the senior team, the Black Stars.

It is a project which began in 1996 when two businessmen, Sly Tetteh and Felix Ansong, decided to invest in local football in Ghana. With similar idiosyncrasies, the pair formed the Liberty Professionals Football Club. Having started as a Division 2 side, the club quickly progressed to the Ghanaian top flight at the first attempt.

The story of how the academy started, though, is one that is both baffling and daring. Tetteh – the brains behind the project – had the idea of starting something special in his country. A former player himself, he understood the need to give young players a chance. Despite his wealth, he made it a point to progressively nurture talents at his club rather than adopt a “galáctico” policy. He began by scouting young players at the National Milo Secondary School Championships. Blessed with a keen eye for talent, Tetteh assembled the best players from the competition.

He picked players aged between 15 and 19 and formed the Liberty Professionals, a name inspired by his Alma mater, the Liberty University of Lynchburg, Virginia in the United States. From this, the Liberty academy would later be formed to serve as a hub that produces players for the first team.

Although Tetteh had a modest football career, playing for local club Sekondi Hasaacas between 1980 and 1992, he was an expert in scouting. And, although many Ghanaians knew very little of him before the millennium, he would go on to become famous for his role in nurturing the majority of Ghana’s golden generation at the start of the 21st century.

Like Barcelona’s famous La Masia, Liberty is also built on a strict code and footballing philosophy. Although the academy has no residence for the kids, the youngsters are nevertheless taken through the values, ethics and every rudiment of the game.

Young footballers are scouted from neighbouring communities, trained and educated to become model professionals. They are taught the values of hard work, humility and respect for teammates, opponents and fans alike. The coaches also make it a responsibility to monitor the youngsters to ensure that their diet and other off-field excesses are checked. “At Liberty, our philosophy is based on possession and position,” says the club’s under-20 coach, Wahid Mohammed. “Every player needs to first understand his role on the pitch in order to make the right decisions.”

At the top of the academy’s philosophical pyramid, though, is high pressing, possession-based football. “There’s a reason why we sought the services Cecil Jones Attuquayefio when this project began,” Wahid explains. “Attoqyayefio is not just the best Ghanaian club coach, he had a clear philosophy about the way football should be played. Our players have to cherish the ball.

To attract the best young talents, the club sends out scouts to the various regions in Ghana to monitor colts football games. This strategy has so far worked well for Liberty, with youngsters joining the academy from all corners of the country.

Wahid himself is familiar with this strategy; he trained at Liberty and went on to captain the senior team, before taking up a role with the club’s under-20s after hanging his boots. The former defender was spotted by scouts of the club in Tamale, a town in the Northern Region of Ghana, and brought to the capital to hone his talents. He went on to play for Liberty Professionals from 1999 to 2007.

With a clear vision, the academy has nurtured many players who have gone on to enjoy stellar football careers. Three years into the formation of Liberty Professionals, the club’s academy formed the core of the Black Starlets (Ghana’s under-17 national team) that won bronze at the 1999 FIFA Under-17 World Cup. Essien, together with two other graduates of the academy, Anthony Obodai and Kwame Pele Frimpong, played starring roles as Ghana secured third-place at the tournament.

Two years on from that impressive showing in New Zealand, Ghana would again put up a memorable performance at the Under-20 World Cup, finishing as runners-up to hosts Argentina. A chunk of the players in that Ghana team were from the Liberty academy. Argentina team boasted star names like Maxi Rodríguez, Fabricio Coloccini and Javier Saviola, who emerged as the tournament’s top scorer with 11 goals. Ghana paraded an equally impressive team, led by six Liberty alumni in the form of Essien, Paintsil, Muntari, Pappoe, Boateng and Obodai.

Liberty’s class of 2001 would eventually turn out to be the core of the Black Stars team for the next 15 years. Joined later by the tenacious Asamoah Gyan, another graduate of Liberty, they would lead Ghana to three successive World Cups in 2006, 2010 and 2014. The Black Stars would also make the semi-final of every AFCON tournament from 2008 and 2017.

Players from the Dansoman-based academy have since dominated every roster to date. Since 2006, at least two graduates from the Liberty academy have made the squads named for every major tournament Ghana has graced.

In 2009, Ghana became the first, and so far only, African country to win the Under-20 World Cup. That squad had four players from the Liberty academy: Mohammed Rabiu, Ghandi Kassenu, Latif Salifu and goalkeeper Daniel Adjei, whose penalty shootout heroics helped the Black Satellites defeat Brazil in the final.

Graduates from Liberty continue to dominate all levels of Ghanaian football, but the absence of Tetteh – who tragically died in 2011 after collapsing while playing football with some friends – has taken a toll on the project. Tetteh wasn’t just a talent spotter, he had good contacts in Africa and across the world. His dream was to build an empire which would outlive generations, the bigger picture being to build academies all over the continent. He started by forming affiliates in Togo, Benin and the Ivory Coast.

In 2003, he acquired a vast piece of land in Dodowa, a quiescent suburb in the capital, to build a sports complex which would also house his academy. The cost of the ultramodern facility was estimated at $5m. The facility was to have a 25,000-capacity stadium, two training fields, a guesthouse, players’ hostel, a hospital, lecture rooms and a shopping mall.

Tetteh was also in talks with some European clubs in the French and Italian top-flights to expand the project and to make it easier for young, talented players to further their careers in Europe. However, this dream has since come to a standstill following his demise. The sports complex project at Dodowa has also stalled.

In 2017, the Liberty Professionals was on the verge of being sold and the academy closed down due to financial constraints. Although the club’s hierarchy later reconsidered their position, it is increasingly evident that Liberty currently lacks the commitment and direction that once made it Ghana’s foremost talent hub at the turn of the millennium.

Two years ago, the club was nearly relegated from the Ghana Premier League – surviving on the final day of the season – while there has been no activity at the academy in the last 15 months as a result of the chaos in Ghanaian football following a corruption scandal that rocked the FA in June 2018. “The academy is still there, but currently it is not active,” Wahid admits, conceding that the club has been struggling financially in recent years.

The legacy of Tetteh, though, lives on. Essien, Paintsil, Gyan and Muntari are a testament to the talents that have emerged from the Liberty academy over the last two decades. This is a talent factory that has produced Premier League winners, Serie A champions, Ligue 1 conquerors and Champions League medallists.

There are also other graduates from the academy spread across Africa, Europe and Asia. Most importantly, the Liberty academy will go down as the local farmhouse behind Ghana’s golden generation of footballers at the beginning of the 21st century.