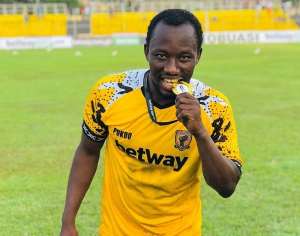 Modernghana Sports can report that veteran attacker Saddick Adams is pushing to have his contract with Obuasi Ashanti Gold terminated in hopes of securing a move elsewhere.

This according to checks, is due to lack of playing time at the club which is currently featuring in the preliminary stage of the 2019/2020 edition of the CAF Confederations Cup.

Following his move from Kotoko to the camp of the Miners, he has not enjoyed the campaign he would have wanted. His stay has mostly been on the bench of the, leaving him unhappy.

Sources say the former Ghana youth star has handed in a request to the management of the Obuasi-based club demanding for his contract to be terminated to enable him to seek for a move to any other interested club.

Having missed out on Ashgold’s first-leg tie with Akonangui FC in Equatorial Guinea, it is likely he will be overlooked again by coach Ricardo Da Rocha when the yellow and blacks do battle in the second leg of the counter on Saturday, August 24, 2019, at the Len Clay Sports Stadium.