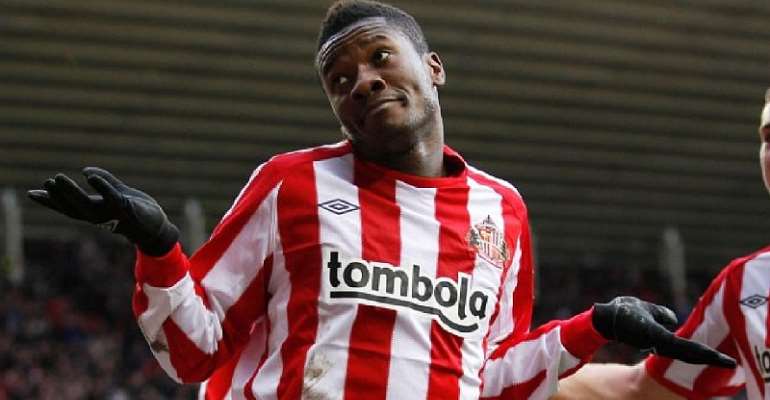 Former Sunderland chief, Niall Quinn, has revealed what led to Asamoah Gyan’s exit from the Stadium of Light back in 2011.

The former Liberty Professionals forward was just over a year into a four-year contract with the then-Premier League club when he was approached to move to Al-Ain.

The Ghanaian international had a bright start of the Stadium of Light scoring 11 goals in his first 36 Premier League outings.

However, Gyan moved to the Middle East—initially on loan—and has never since played in a major European league.

“With Asamoah, he came to us - via his agent - who said ‘I have had a huge offer in the Middle East and I must go' to which we told him 'look, we can’t do that.’

“We waited a six-month period to see if he would come back into line, we gave him a new contract too - although it did pale in comparison to what was on the table from Al-Ain and also he was being pressured by them to make the move.

“We were hoping he’d go there for three months and hate it and want to come back," added former Sunderland striker Quinn, who spend six years involved in the running of the club.

“If we were right up the top of the league, fighting for a Champions League spot then you have more ability to keep hold of players the way top four clubs do, but we were Sunderland trying really hard to keep everything working.

“If we were to give one of those players the money they were wanting - well, I wasn’t going to sanction that because it puts the club in a terrible position.

“We weren’t taking in any more income, we had hit the level of what we could spend considering [Former club owner] Ellis Short gave us a lot of money, another level would have blown the club into another level.

“It was the financial facts of life we have to abide by. Asamoah went, Jordan [Henderson] went - those deals alone brought us in £50 million to £60 million.”

After four seasons with Al-Ain, Gyan moved to the Chinese Super League with Shanghai SIPG, returning briefly to the Gulf with Al Ahli Dubai, before switching to current club Kayserispor in 2017.

To date, he’s struggled to make an impact in the Super Lig, and also struggled at the Africa Cup of Nations, where he was included in the Black Stars’ squad despite originally retiring from international football ahead of the tournament after having the captaincy removed from him.

Ghana were eliminated in the Round of 16, following defeat by Tunisia, with making just two substitute appearances during the competition.