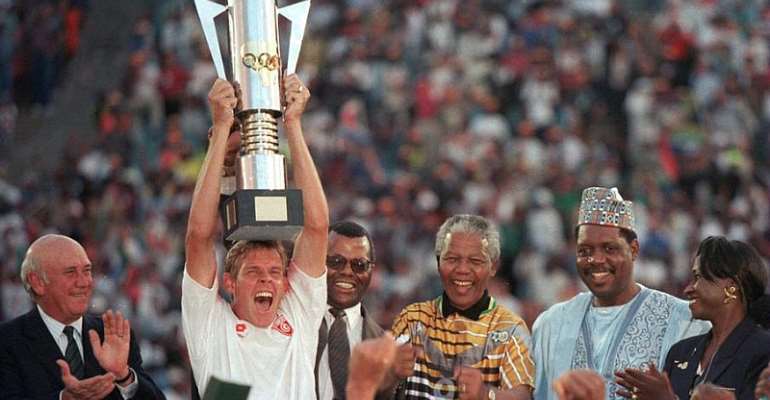 The 32nd Africa Cup of Nations will be staged in Egypt from June 21-July 19, with an expanded field of 24 teams vying for the coveted trophy.

Played every two years, the tournament has a long and rich history, older even than the European Championships, and is the jewel in the African football crown.

In the second of a three-part series over the coming days, Supersport.com looks back at all past finals, in this case from 1978 to 1996.

1978 IN GHANA
Champions: Ghana
Ghana claimed their third title on home soil with a 2-0 victory over Uganda in the final, and The Cranes would have to wait another 29 years before they appeared at the continental showpiece again.

Opoku Afriyie bagged both goals for the Black Stars in the decider, while Nigeria took third place after their bronze-medal match against Tunisia was abandoned at 1-1.

The Tunisians walked off the pitch after they disputed a goal scored by the Super Eagles in the 42ndminute and refused to play on. The game was awarded 2-0 to Nigeria and Tunisia banned from CAF competitions for two years.

1980 IN NIGERIA
Champions: Nigeria
Nigeria claimed their first continental title as they used the home ground to their advantage to overwhelm Algeria 3-0 in the final, with Segun Odegbami grabbing a brace of goals in the gold medal match.

Nigeria had beaten Morocco 1-0 in the semifinals, while Algeria edged Egypt on penalties in a strong competition for North African sides.

Morocco then took the bronze medal as they beat the Egyptians 2-0 in the third-place play-off, Khalid Labied with both goals.

This was the one and only previous tournament appearance for Tanzania, who returns to the stage in 2019.

1982 IN LIBYA
Champions: Ghana
Ghana’s early dominance of the Nations Cup continued as they claimed a fourth title, this time edging hosts and debutants Libya 7-6 on penalties in the final after they had played to a 1-1 draw in Tripoli.

It was also the last time the Black Stars were champions, a long wait for their legion of fans as they head into the 2019 competition.

Zambia claimed the bronze with a 2-0 win over Algeria, who had lost again to Ghana in the semifinals.

1984 IN IVORY COAST
Champions: Cameroon
Cameroon claimed their first continental title when they beat Nigeria 3-1 in the decider in Abidjan, with just the beginnings of the team that would compete so well at the 1990 World Cup in Italy.

Algeria defeated Egypt 3-1 in the bronze medal match as they continued to be among the leading teams, without being able to claim gold.

Malawi appeared at the finals for the first time but came away with just a single point from their three games.

1986 IN EGYPT
Champions: Egypt
Egypt were awarded hosting rights and used that to their advantage to claim the title, their third continental success in all.

They scraped into the semifinals with a win over debutants Mozambique in their final fixture, but went on to defeat Morocco 1-0 in the semis and then edge defending champions Cameroon 5-4 in a penalty shoot-out after the decider had ended 0-0.

Ivory Coast finished third as they beat Morocco 3-2 in the bronze-medal match.

The legendary Roger Milla finished top-scorer in the competition with four goals.

1988 IN MOROCCO
Champions: Cameroon
Cameroon’s rise in the 1980s continued as they claimed a third final place in a row and won a second title in three attempts, this time in Morocco.

They beat Morocco 1-0 in the semifinals and then claimed a single goal success in the final as Emmanuel Kundé struck a 55th-minute penalty.

The third-place play-off between hosts Morocco and Algeria finished 1-1, with the latter going on to a 4-3 penalty shoot-out success.

1990 IN ALGERIA
Champions: Algeria
Algeria’s run of near-misses in the Nations Cup finally came to an end as they lifted the trophy on home soil when they defeated luckless Nigeria 1-0 in the final.

Chérif Oudjani scored the only goal of the game in the first half as a Rabah Madjer-inspired Algeria claimed victory in front of more than 105 000 people at the Stade 5 Juillet 1962 in Algiers.

Zambia took home the bronze medal as they beat Senegal 1-0 in the third-place play-off.

1992 IN SENEGAL
Champions: Ivory Coast
Ivory Coast became champions for the first time after what would be one of the most epic penalty shoot-outs in football history.

Their final against Ghana had ended 0-0, but that was just the start of the dramas as they eventually triumphed 11-10 in the shoot-out as Anthony Baffoe missed the decisive kick.

Nigeria took the bronze as Rashidi Yekini scored late on to claim a 2-1 victory over Cameroon.

The competition was expanded to 12 teams for the first time.

1994 IN TUNISIA
Champions: Nigeria
Nigeria were just about at the peak of their powers and would go on to have a successful World Cup in the United States, but before that lifted the African crown.

They came up against a Zambian side rebuilt after 18 players were tragically killed in an aircraft accident off the coast of Gabon less than a year earlier.

Zambia took an early lead in the final, but Emmanuel Amunike’s brace of goals took the Super Eagles to their triumph.

Ivory Coast defeated Mali 3-1 to finish third.
1996 IN SOUTH AFRICA
Champions: South Africa
Debutants South Africa lifted the trophy on home soil, defeating Tunisia 2-0 in the final thanks to a brace of goals from Mark Williams.

It was a deserving triumph after they had brushed aside Ghana 3-0 in the semifinals, though Nigeria’s boycott of the tournament for political reasons has long cast a small shadow over the achievement.

Zambia claimed the bronze medal when they beat the Ghanaians 1-0 in the third-place play-off.

The competition was due to have 16 sides but ended up with 15 following the withdrawal of Nigeria.

Hossam Hassan (Egypt) and a youthful Benni McCarthy (South Africa) top-scored with seven goals each in what was a high-scoring tournament that averaged almost three goals per game having finally been expanded to 16 teams.

DR Congo claimed the bronze medal after a 4-1 penalty shoot-out victory over Burkina Faso as the sides played to a thrilling 4-4 draw in the third-place play-off.