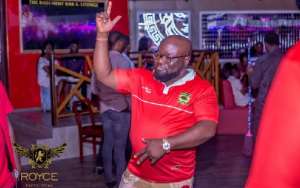 Dr Amo Sarpong, Policy Analyst of Asante Kotoko, has been charged by the Ghana Football Association (GFA) for breaching Article 35(1b), 35(7d) and 35(9) of GFA General Regulations after firing gunshots during his club’s Normalisation Committee match against Berekum Chelsea at the Golden City Park on Sunday, April 28.

The Statement of Offence filed by the GFA Prosecutor, Raphael Tottimeh, also charged Dr Sarpong for breaching Article 54(1) of the Disciplinary Code in respect of the said match.

The Particulars of the Offence as communicated to the Kotoko official who was allegedly attacked by a section of the home fans during the melee, stated that, ”Before the commencement of the match between Berekum Chelsea FC and Asante Kotoko SC played on 28th April, 2019 at the Golden City Park, it is alleged that you pulled a gun and fired many shots, which incited violence at the venue in clear violation of the GFA Regulations.”

Dr Sarpong is supposed to file his defence by the close of work on Tuesday, May 7, 2019, on or before 5pm at the GFA Secretariat or through email to the GFA Disciplinary Committee if he pleads not guilty to the charge and requests for a personal hearing to defend himself.

If he opts for a personal hearing, the defendant is expected to attend the Disciplinary Committee hearing on Wednesday, May 8, at 2pm at the GFA Secretariat to answer the charge, failure of which would see the committee proceeding to adjudicate the case in his absence.