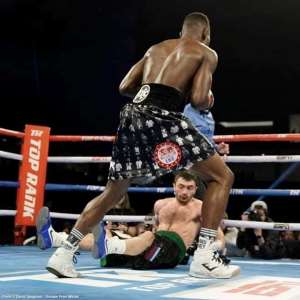 Ghana’s hottest world champ Richard will be arriving back home on Thursday 14th February at 3.15pm on flight Air Portugal 1527 from Lisbon, according to reports from his camp.

This was revealed by his manager Michael Amoo Bediako Snr. the Chief Executive Officer of Streetwise Management.

Amoo Bediako will arrive in the capital on Wednesday the 13th of February a day before the new IBF lightweight Champion Richard Commey.

“Richard will be arriving back home on Thursday 14th February at 3.15pm on flight Air Portugal 1527 from Lisbon.

Richard Commey made history on the 2nd of February in Frisco Texas at the Ford Center when he KOed his Russian opponent Isa Chaniev in round 2 of the scheduled 12 rounder.

The Ghana Boxing Authority (GBA) is entreating all boxing fans and sundry to make the trip to the Kotoka International Airport on Thursday the 14th of February at 3:15 GMT.

The GBA president, however, cautions fans to behave maturely at the airport in welcoming the newest champion of Ghana and Africa.