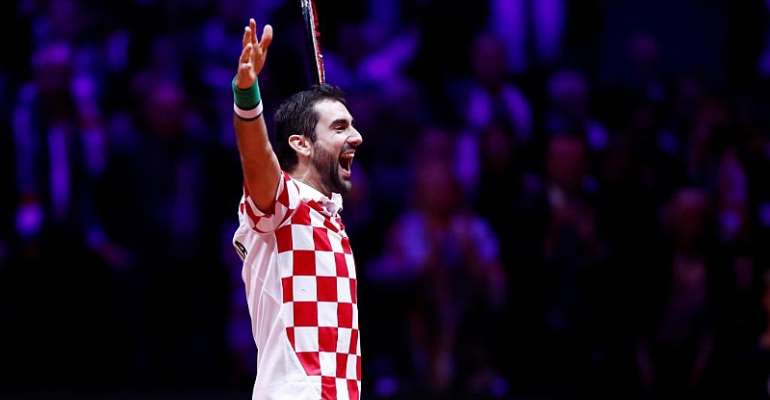 It was Croatia's second title of the 118-year-old tournament which will undergo a radical change of format for the 2019 competition.

In the fourth match of the last final played under the old traditions, Cilic, the world number seven, and Pouille, ranked 25 places beneath him, offered up a full-blooded contest.

A tiebreak decided the first set and Cilic broke to lead 4-2 in the second set. He consolidated the break for a 5-2 advantage.

Serving to stay in the set, Pouille, played three sloppy shots to hand Cilic three set points and though he saved them all, he coughed up a fourth when a backhand drive slumped into the net.

But the 24-year-old showed nerve in front of the 23,000 fans to claw his way out and hold his serve. That forced Cilic to serve for the second set. Would the squandered chances play on his mind?

Yes. And no. The 30-year-old failed to register any first serves on his way to his fifth set point. But big forehand drives pinned Pouille to the back of the court before his seventh forehand winner of the set brought him a two set lead at 7-6, 6-3 after one hour and 41 minutes of play.

Cilic underlined his supremacy with a three game surge in the third set to lead 4-2. And though Pouille cut the deficit to 4-3, he was unable to stem the tide. Cilic eased into a 5-3 advantage and bulldozed his way to three match points on Pouille's serve.

Pouille snatched back two of them but running into the net following a backhand drive down the line, Cilic flummoxed the Frenchman with a lob.

The ball lingered in the air before falling well in. The vocal band of Croatian fans exploded with joy. Cilic, beaming, held his arms wide to greet the acclaim before being swamped by his teammates.

“I'm very happy,” said Cilic in the on court interview after his victory. “It has been a dream weekend. I will be there next year to defend the title.”