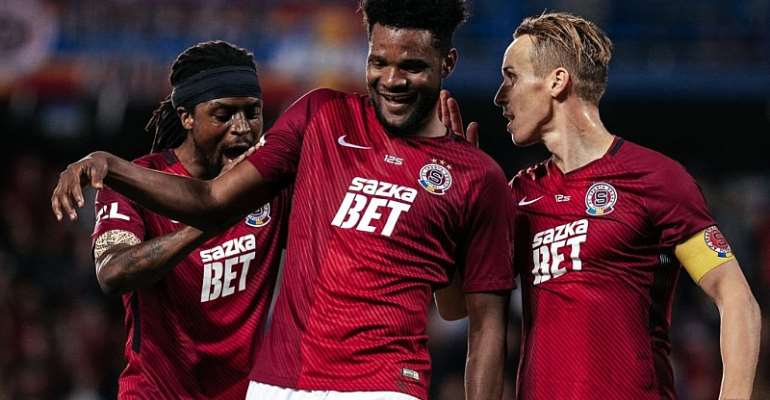 Red-hot Benjamin Tetteh has expressed his delight after scoring his first brace in Sparta Prague jersey during their 4-1 win over Slovan Liberec in the Czech top flight league last Saturday.

The lanky poacher netted for the third successive time as he scored a brace in the heavy over his former side Slovan Liberec.

Tetteh's double strike took his tally to five in the ongoing top-flight league, propelling him to joint 3rd on the scorer's chart.

In a one-on-one interview with the club's official mouthpiece, the 21-year-old could not hide his excitement over his exploits.

For the first time in Sparta you scored two goals in one match. How do you rate your performance?

We are, of course, happy; I managed to give myself two goals in one league duel for the first time. It's a great satisfaction.

You also played in the third game in a row. Do you feel you have a great form?

I think the match is improving from the game. This is important, it makes me happy.

How long have you been preparing for a new game system with three trackers?

We practiced it for a whole week and we really did a lot of time. He thinks that they all got accustomed to that.

Is this result an ideal match for the next match in Plzen?

Yes. We showed good performance and won. All the boys in the cabin will still lift their confidence and we will go to Plzen in a good mood.

When you left the field, people clapped and chanted your name. How did you feel?

It was great. That feeling when you leave the pitch and people call your name is irresistible. Thank you so much for all.