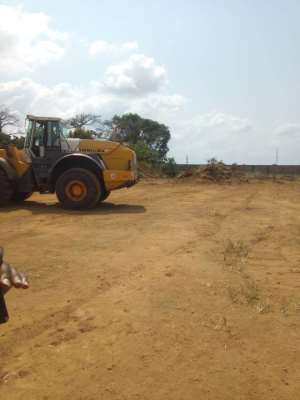 The Ghana Olympic Committee (GOC) has begun earthworks their Amansaman land which has been earmarked for the Ghana OlympiAfrica Center.

The said land was acquired over a decade ago for the project but was not used for its intended purpose. However, a wall built around it to deter encroachers from invading the land.

The current administration of the GOC led by Mr Ben Nunoo Mensah is keen on bringing life back onto the site for Ghana to have her share of the OlympiAfrica Center.

In view of this, GOC has secured a deal with Decker Engineering and Construction Limited to begin earthworks on the land to make it ready for the necessary architectural works to take place.

The GOC held a media tour on the site for the media to have first-hand information on the project and the various facilities that would be built on the site.

The President, Mr Ben Nunoo Mensah said Decker would clear and level the whole land for free and also prepare it for the first building to be erected on it.

He said the GOC did not have the funding for the whole project but called on corporate Ghana to come on board to assist in giving the youth of Amasaman and the country as a whole a place to exhibit their talents.

“We have great ideas but funding is the issue so any company that has the development of the youth at heart should come on board to partner with the GOC,” he said.

Nunoo Mensah said the Association of National Olympic Committees of Africa (ANOCA) has agreed to give the GOC $150,000 to begin the work on the site.

He, however, added that ANOCA has granted them permission to solicit for funds from corporate bodies to support the project and in return get a naming right for whichever project they support.

The Municipal Chief Executive Officer of Ga West Assembly, Hon. Clement Wilkinson also added that he was delighted the project has begun and assured his office’s support in realisation the dream.

He said his office would also give a portion of their Assembly’s consolidated fund to support the project because when it is completed his constituents would be the first to benefit.

Architect in charge of the project, Mr S.M Quartey from Atelier Architects mentioned that the first phase of the project would an office complex which would house the administrative part of the centre and would comprise of offices, kitchen and a conference room.

He noted that the next phase would be about five multi-purpose pitches plus an Olympic size football field with tartan tracks. Then a hostel facility would be added to the next phase to cater for the various national teams.