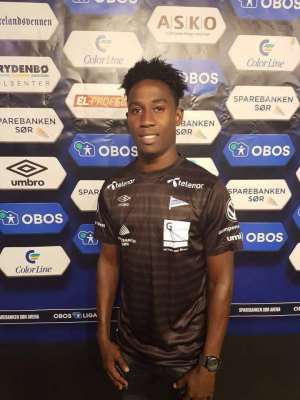 Twum who led the Black Stars 'B' to win the WAFU tournament was unveiled on Friday after his move to the IK Start was announced on Thursday.

"Everyone has taken me in a good way. I already feel like home. Now I will only do my best to help the team in the future." he told the club's website.

"I think I'm good at the ball and like to both dribble and shoot. I am an offensive type."

"I'm ready to take a step forward and have worked hard to reach this far. It has not been easy for me in Ghana, but now the dream is about to come true."

The former Inter Allies FC and Heart of Lions midfielder emerged the player of the tournament at the 2017 WAFU Cup of Nations which was played in September this year.

Twum will wear the number 18 shirt at his new club.

We can't wait any longer – CLOGSAG to embark on nationwide s...
11 minutes ago

Nat Nuno Amarteifio, former Mayor of Accra to be buried on F...
11 minutes ago