Top 5 Ghanaian Players Who Made Their Mark In The Bundesliga 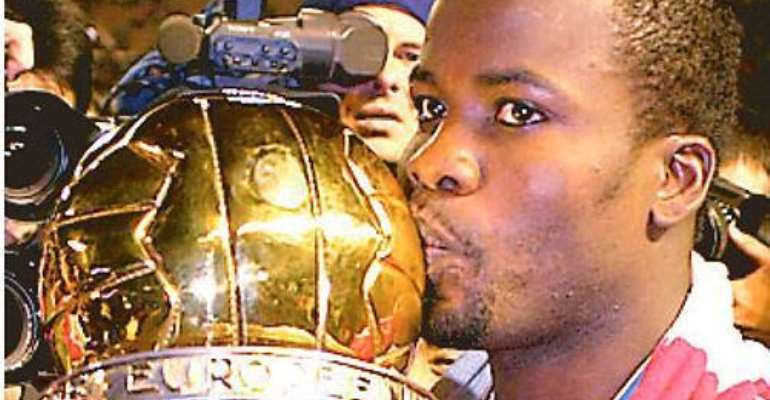 Samuel Kuffour
There can be no question that Samuel Kuffour will forever remain one of the most decorated players in African football history. The former centre-back rose through the youth ranks at Fantomas Kumasi, King Faisal Babes and Torino before joining Bundesliga giants Bayern Munich in 1993. It is there where he developed into one of the best defenders in world football; Kuffour became an integral part of a formidable Bayern Munich side that won six league titles, four DFB-Pokal cups and one Champions League trophy during a glittering eleven-year stint in Bavaria. He also became the youngest ever defender to score in the Champions League at the age of just 18 years, 61 days by heading in the second equaliser in a 2-2 draw with Spartak Moscow on November 2nd, 1994 - a record that still stands to this day.

Finishing second in the African Player of the Year award in 1999 and 2001 further illustrates the level that Kuffour reached during his playing career. He was voted into the Top 30 African Players of All-Time by the Confederation of African Football in 2007 after representing his country at every level; Kuffour won his first senior cap at the age of just seventeen and became the national team captain six years later as he picked up a total of fifty-nine caps for Ghana.

Tony Yeboah
The reason behind the considerable waves of African footballers that have arrived in the Bundesliga since the 1990s can be put down to one man - Tony Yeboah. He almost single-handedly changed the entire perception of black and African footballers in Germany through his ability to perform on the pitch and score goals wherever he went. It paved the way for racial integration in the Bundesliga as the league and its fans, which had not been entirely sympathetic towards players of African origin, were ready to welcome others; it led to the likes of Kuffour, Jay-Jay Okocha and Souleyman Sane arriving in Germany to make a real name for themselves.

Yeboah will always be renowned as one of the most prolific goal scorers in Ghanaian and African football history who had a habit of scoring fantastic goals. After rising through the youth levels at Asante Kotoko, Cornerstones Kumasi and Okwawu United, Yeboah moved to Germany in 1988 where he played for 2.Bundesliga side 1.FC Saarbrucken. Scoring 26 in 65 appearances over a two-year period earned the prolific striker a move to the Bundesliga with Eintracht Frankfurt where, despite receiving a hostile reception as the club's first ever black player, he quickly became a cult hero. A record of 68 goals in 123 appearances put Yeboah alongside the best players in the Bundesliga between 1990 and 1995. After a brief two-year stint with Leeds United in the English Premier League, Yeboah returned to Germany to play for Hamburger SV where he scored 28 goals in 100 appearances.

Kevin-Prince Boateng
Talented and controversial in equal measure is the best way to describe a player who some would argue has never truly fulfilled his potential. Kevin-Prince Boateng has played for no fewer than eight different clubs that include two spells at Italian giants AC Milan, along with a stint in the English Premier League with Tottenham and Portsmouth, during a senior playing career that has had several up and down moments. The midfielder now finds himself back in the Bundesliga with Eintracht Frankfurt, having come through the ranks at Hertha Berlin before playing for Borussia Dortmund (2009) and Schalke 04 (2013-2015). His move came as a surprise to many, given that Boateng had played a pivotal role in helping La Liga newcomers Las Palmas to establish themselves and secure a highly respectable 14th place finish following a period in which his career was heading for exile.

Boateng was born in West Berlin and had represented Germany at Under 19, Under 20 and Under 21 level, but made the decision to switch international allegiances to Ghana in 2010. It enabled a midfielder with dynamic ability and quality on the ball to represent the Black Stars at the 2010 and 2014 World Cup, although the latter saw Boateng suspended and sent home for disciplinary reasons. He has not played for Ghana since, and with Kwesi Appiah - the manager who Boateng is rumoured to have verbally abused in Brazil - back at the helm, it appears that the midfielder will not add to the fifteen caps he picked up as a Black Stars international anytime soon.

Isaac Vorsah
Although many of the attacking stars stole the limelight during the golden era of Ghanaian football leading up to the 2010 World Cup in South Africa, the defenders also deserve considerable recognition. Isaac Vorsah was part of a Black Stars team that was extremely tough to break down at the back and allowed the likes of Asamoah Gyan and Sulley Muntari to express themselves further up the pitch. His considerable height and physical prowess were standout qualities that Vorsah utilised as a towering influence in defence; these qualities made him a favourite for club and country during the five-year period he spent at Bundesliga side 1899 Hoffenheim between 2007 and 2012. However, a number of serious injuries have damaged Vorsah's career, with the 29-year-old now plying his trade in the Saudi Professional League with Al Ohod. Furthermore, he has failed to add to his forty caps for Ghana since last appearing for the national team in 2013, although it is not beyond the realms of possibility that Appiah may make as bold a move as placing everything on red at the roulette table at Lucky Nugget and leave the door open for Vorsah to return to the international fold.

Otto Addo
Another player whose career was significantly affected by injuries is Otto Addo. Nobody will ever know how good the former midfielder could have been after several knee ligament injuries prevented a player, who showed numerous moments of true quality for club and country, from fulfilling his true potential. It did not prevent him from lifting the Bundesliga title with Borussia Dortmund in 2002, but despite other spells in the German top flight with Mainz 05 and Hamburger SV, Addo could have achieved so much more during his sixteen-year senior playing career.

After spending two years as Ghana's head scout between 2013 and 2015, Addo is now back in Germany as assistant manager at Borussia Monchengladbach.