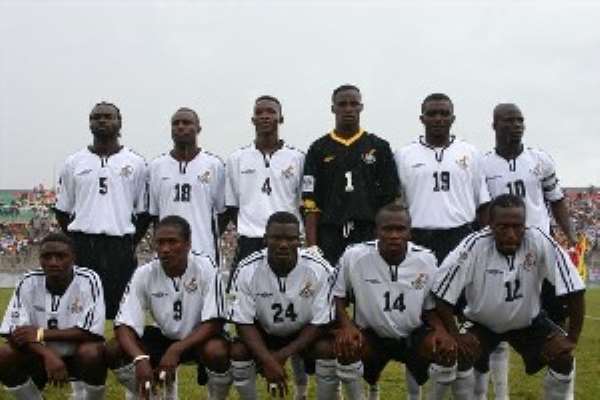 Johannesburg (SA), June 19, GNA - The Black Stars revived the nation's World Cup dreams with two second half goals opened by "important goal scorer" Mathew Amoah against South Africa in Johannesburg on Saturday to take Ghana to the summit on 15 points of the Africa Zone Group Two albeit on goals difference. But two early scares by veteran striker Shaun Bartlett who started the game only after passing a late fitness test and an aerial suspect by goalkeeper George Owu coupled with the introduction of South African Siyabonga Nomvete created some anxious moments for the Black Stars. Bartlett's sixth minute narrow miss and a 14th-minute header, which went past the upright, could have sent the Stars into an early comma. The South Africans were quicker on the ball each time they were on the move backed by almost 60,000 vuvuzela (horn blowing) fans in the 80,000 capacity FNB Stadium which took a calmed and solid defence and a creative midfield built around Michael Essien to thwart. Ghana exhibited flashes of brilliance intermittently, but really got their acts together after the 26th-minute when Laryea Kingston's combative character spiced with skipper Stephen Appiah's deft touches gave Essien the leeway to feed the strikers duo of Amoah and sensational Joetex Frimpong. Appiah blew off a 17th minute opportunity from an excellent through ball by Dan Edusei after left winger Suley Muntari had gone through two defenders while Amoah fumbled three minutes earlier from the supply from Edusei. Goalkeeper Owu created some anxious moments for the Black Stars seven minutes after the recess and later in the 58th minutes when he failed to grab two aerial balls but Lerato Chabangu's shots on both occasions were scooped on the line by defenders Issa Ahmed and John Paintsil respectively. Appiah broke through an offside trap, race with the ball in the 59th minute to lay on a decent pass for Amoah to tap in the opener, which gave the Bafana Bafana a hangover. The stadium went dead silence and the vuvuzelas could no longer be head until the arrival of Nomvete, who brought the fans back on their feet. The Zulu boy who came on for Chabangu gave the Ghanaian defenders some extra work to do, especially on the right side manned by Paintsil and substitute Hamza Mohammed who came on for injured Kingston. But just as Nomvete was trying to revive the South African team from the hangover, Essien headed in the second on the stroke of full time from Appiah's lob. The Stands immediately got emptied and the fans could not witness the time added on. South African Coach Stuart Baxter blamed Moroccan referee Guezzaz for giving Ghana an offside goal, adding that the second goal " killed the gun." It was South Africa's first loss at the FNB Stadium. His views were re-echoed by skipper Aaron Mokeona who earned his 50th cap for South Africa and was presented with a cheque for 15,000 Rands and a trophy. Line up: George Owu, John Paintsil, Dan Edusei, Issa Ahmed, John Mensah, Michael Essien, Laryea Kingston/ Hamza Mohammed, Stephen Appiah, Mathew Amoah, Joetex Frimpong, Suley Muntari/ Abubakari Yakubu.