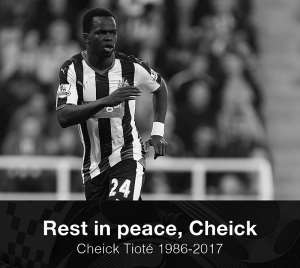 Ace Sports journalist Carl Tuffour has entreated football governing bodies to raise awareness of tackling the strings of heart attacks in the game.

Tuffour made the assertion following the announcement of the sudden death of former Ivory Coast midfielder Cheik Tiote after he collapsed on the training pitch in China.

'My question is again? Another African dies. Then there is no need for us to enjoy football again because life is more important than that and I think football controlling bodies must begin to focus on this and get scientists to get to the bottom of this," he said on Football 360 on Kwese Sports.

He began his professional career in Belgium with Anderlecht in 2005 before moving to Dutch side FC Twente, where he made 86 appearances and won the Eredivisie league title in the 2009-10 season under manager Steve McClaren.

Tiote, a defensive midfielder, then signed for Newcastle in 2010 for £3.5m.