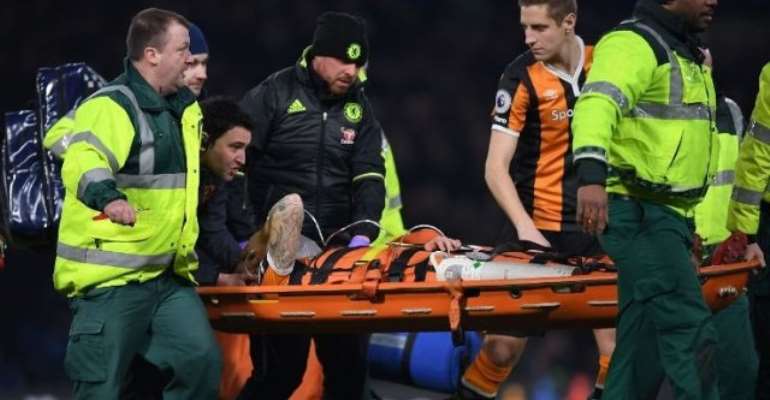 Hull midfielder Ryan Mason is in stable condition after suffering a fractured skull in Sunday's Premier League fixture at Chelsea, the club has confirmed.

The 25-year-old former Tottenham player was taken to hospital following a clash of heads with Chelsea's Gary Cahill in Hull's box after 14 minutes of the Tigers' 2-0 loss at Stamford Bridge.

A statement issued on the club's official website said: "The club can confirm that Ryan Mason sustained a skull fracture in our fixture at Chelsea this afternoon.

"He was taken to St Mary's Hospital where he has undergone surgery.

"Ryan is in a stable condition and is expected to remain in hospital for the next few days."

Hull City boss Marco Silva was pleased with the spirit in his side's performance despite losing 2-0 to Chelsea.

Further updates on Mason's condition will be given tomorrow, according to the release.

Immediately after the game Hull boss Marco Silva said he was hoping the injury was not serious.

"Ryan Mason at this moment is staying in the hospital. I don't know more news about this,'' Silva said at the time.

"I hope nothing special, nothing serious, but at this moment the player stays in hospital.

"The doctor stayed with the player in hospital. I wait for news.''

Both medical teams rushed to the scene as referee Neil Swarbrick stopped play after the collision.

Cahill quickly returned to his feet and readied himself to return to the action. He completed the game and scored Chelsea's second goal.

Mason was in hospital by then, having received treatment for around six minutes on the field before departing on a stretcher, while receiving oxygen. David Meyler replaced him.

Chelsea head coach Antonio Conte said: "Everyone at Chelsea wants to wish for him the best.

"It was a bad accident with Gary and, I must be honest, after the first half also Gary wasn't really good. He decided to continue the game.

"It was very bad this accident. Everyone at Chelsea, we hope to see him very soon on the pitch and to recover very soon.''