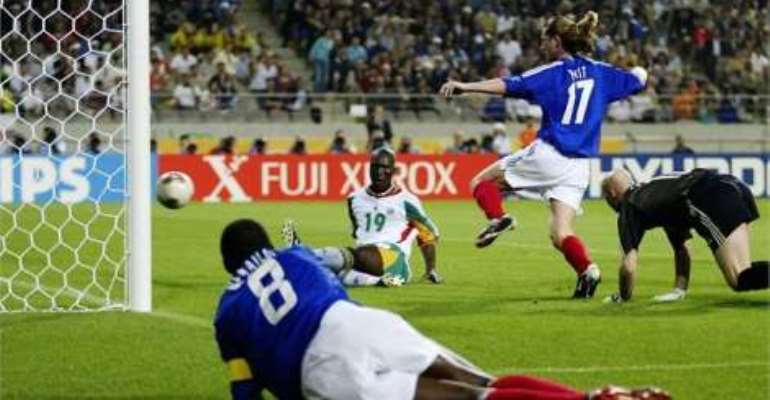 On 31st May, 2002, Senegal shocked France and the footballing world by claiming victory in the opening game of the World Cup.

The defending champions struggled to find their stride and clearly suffered from Zinedine Zidane's withdrawal through injury.

In his absence it was left to Senegal's El Hadji Diouf to claim the starring role.

Diouf repeatedly harassed the French defence into mistakes and was instrumental in Bouba Diop's goal.

After all the hype and build-up and a spectacular opening ceremony, the first match of the tournament lived up to expectations - even if France did not.

Roger Lemerre's team were patient to the extent of being pedestrian at times, and in an open game their probing play was often predictable.

Senegal had failed to be overawed by the occasion in the Seoul Stadium and tested the French defence with pace up front early on.

France had nearly taken the lead after 21 minutes when David Trezeguet's right foot shot crashed back off a post with keeper Tony Sylva beaten.

After the goal they stepped up the pressure. Sylva caught Youri Djorkaeff's free-kick then the Frenchman fired over.

France should have levelled in the 56th minute but striker Thierry Henry, unmarked at the far post, headed over. A minute later Sylva clutched Patrick Vieira's header from a corner. And Henry nearly made amends when his curling right-foot shot hit the bar.

But the champions were also saved by the woodwork at the other end when Khalilou Fadiga's drive clipped the top of the bar.

Henry had a chance to save France's blushes on 90 minutes after hesitancy in Senegal's defence but Sylva kept out his shot.