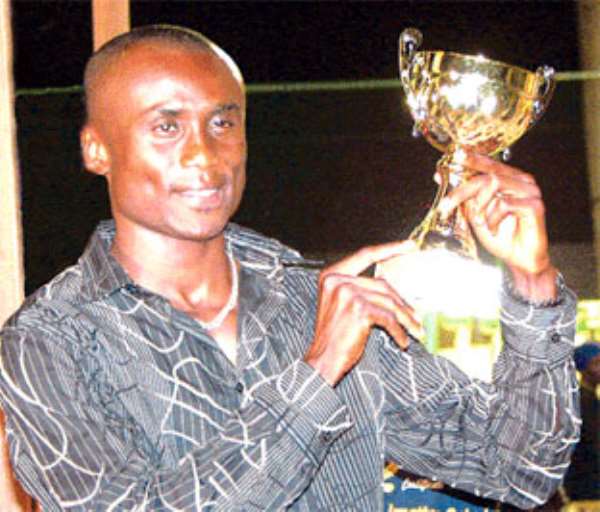 Accra, Dec. 31, GNA - Ghanaian long jumper, Ignatius Gaisah won the 2004 Sports Writers Association of Ghana (SWAG) topmost award - Sports Personality of the Year - for the second time running, a statement said in Accra on Thursday. Gaisah also won the Male Athlete of the Year award, a feat he achieved last year. In conferring its highest award on Holland-based Gaisah, SWAG acknowledged his outstanding performance this year in which he set a new national long jump record of 8.32 metres and won gold at the IAAF World Athletics Final in Monaco. In its year-ending rankings the International Association of Athletics Federations (IAAF) named Gaisah as the third best long jumper in the world. Heptathlete Margaret Simpson was named for the third year running as the Female Athlete of the Year, in a season that she retained the African heptathlon title and set a new African record of 6154 points at the 2005 African Championship in Congo-Brazzaville. Simpson reached the final of the Olympic Games in Athens and ended the year ranked by the IAAF as the ninth (9th) best heptathlete in the world. Black Stars captain Stephen Appiah took the top individual football honour after being named as Male Footballer of the Year, in recognition of his immense contribution to the national teams (Black Stars and Black Meteors), and also for his impressive performance for his Italian club Juventus. Black Queens goalkeeper Memunatu Sulemana was named Female Footballer of the Year, in recognition of her contribution to the national team and also being named by FIFA in the world All-star team. Osumanu Yahya (Ossie Duran) won the Professional Boxer of the Year award after winning the Commonwealth super-welterweight title and successfully defending his Commonwealth welterweight crown on a number of times this year. Heart of Lions' chairman Mr Victor Ahiakpor was named Chairman of the Year, for steering the club from Division Two to the qualify for the CAF Confederation Cup within a matter of three years, and also developing and promoting football in the Volta Region. Other award winners are as follows: Tennis Star of the Year- Henry Adjei-Darko, Table Tennis Star- Nana Yaw Boateng
Referee of the Year (joint) -Ataa Eddie Pappoe (Boxing) and FIFA referee Dwomoh (football). Discovery of the Year - Vivian Mills, Abura English-Islamic JSS
Most Promising Star- Millicent Boadi, three-times Accra Milo Marathon Champion. Dedication and Valour - Yaw Serbeh (Berekum Arsenals FC) Awards for Team of the Year, Coach of the Year and Hockey Star will be named later. The statement said SWAG has decided there would be no awards for Amateur Boxing, Volleyball Star, Top Scoring Club and Goal-king as a result of the inactivity of volleyball, amateur boxing, and the non-national character of the GT Premier League. Three individuals and two groups were named for Special Awards, for the contribution to sports. They were Mr George Dasoberi of the Ghanaman School of Excellence, Alhaji Karim Gruzah, founder of King Faisal FC, Madam Habiba Atta (women's football), Black Wonders (the national hearing impaired team), and the CAN 2008 Bid Committee.
The SWAG Awards, which seeks to recognise and reward the contribution of outstanding sports personalities and institutions that contribute positively towards the development of sports, was instituted in 1974 and has run uninterrupted for three decades.

Come back home and let's build Ghana together — Finance Mini...
10 hours ago