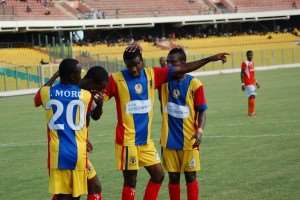 Accra Hearts of Oak will settle the contractual fees of their newly acquired players on Monday, GHANAsoccernet.com can reveal.

The Phobians on the deadline day signed nine (9) new players to beef up their team ahead of the upcoming season as they look forward to doing better than what they did last season.

Below are the new nine signed up players for the 2016 Ghana Premier League;

The Ghana Premier League has been tentatively scheduled to come off on the 20th February, 2016.