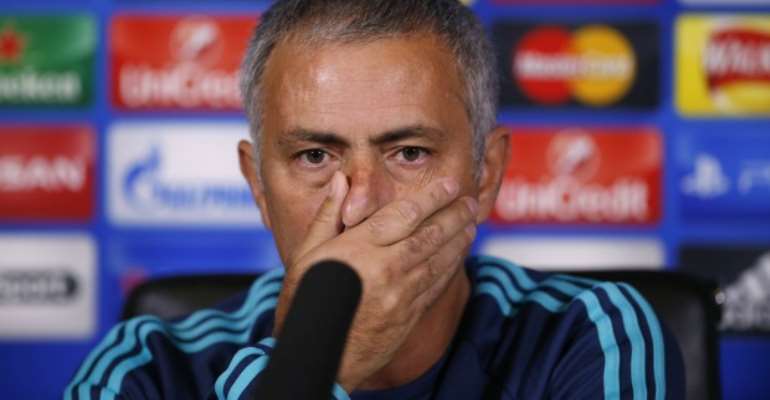 Chelsea boss Jose Mourinho has rejected being affected by ‘third season syndrome’ and told a BBC reporter to “Google answers to stupid questions”.

The Premier League champions are 17th in the table after losing three of their opening five games of the season.

Asked if he still has the qualities of a great manager, Mourinho replied: “The point is that the question is stupid. I am sorry.”

The Blues face Maccabi Tel Aviv in the Champions League on Wednesday.

The Portuguese manager, who joined the club in 2013 for a second spell, said losing is a “strange feeling” after his side’s worst start to a top-flight season in 29 years.

Chelsea’s 3-2 victory away at West Brom in August is their only victory in the league so far.

He added: “I promise you I am fine. I am not happy. I am not used to losing so many times but I am adapting to the situation.

“You cannot expect me to say it is all smiles, laughing and jokes. When people are not getting success we work for, we are going to be frustrated.

“We know what we are – champions of England. The fans sing that. Nobody can steal what we are or our trophies or our history, you can try but you can’t do that.

“When you are used to winning all the time, then when you don’t it is a strange feeling. Some people deal well with it, others not as good.” Spiky Mourinho refutes ‘third season syndrome’

In a testy exchange with BBC Sport’s Ben Smith, Mourinho rejected the idea that performances of the teams he has managed deteriorated in his third season in charge:

Ben Smith: Do you believe that you still have all the qualities that made you such a great manager? A lot has been made of the third season in your time at clubs – what do you say to that?

BS: Sure, but you know what I’m getting at…

BS: Jose, you know what I’m getting at though, don’t you, how important is it for you to build…

BS: Jose, you know the point of the question…

JM: No, I know the point, the point is that the question is stupid. I am sorry…

Mourinho also rebuffed a suggestion from one journalist that his new short haircut was a response to the turmoil at Chelsea.

Asked if there was any correlation between his haircut and his mood, Mourinho replied: “My haircut isn’t as radical as it has been. I am fine, I promise you.”

Pressed further on whether the stress of Chelsea’s poor run had caused his hair to fall out, Mourinho smiled and shook his head.