Exclusive: I Will end my contract at Kotoko before moving – Ahmed Adams 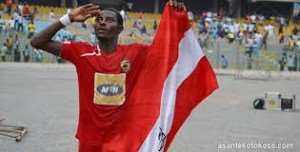 Asante Kotoko defender, Ahmed Adams has disclosed that he will see his contract with the Porcupine family expire before moving to join any other club if offers keep  on coming.

ghanasoccernet.com has gathered that Asante Kotoko has had offers from various African clubs including Zamalek of Egypt and Mamelodi Sundowns of South Africa but the Black Meteors defender insists he will see his contract expiring before ending his marriage life with the Oseikrom lads.

“I have enjoyed massive support from my team mates and the fans. The coach is like a father to me and he advices me as and when necessary. I discuss games with him on personal level  and he tells me what I did and what I should have done. I believe if I should stay with the club for a year or two more, I will learn a lot and that will see me getting  a better offer”, Ahmed told ghanasoccernet.com .

“I have heard that clubs have expressed interest in me but I believe in patience. I believe that if I should stay with the clun for another season, I can get a better offer than what is coming now. Playing for the biggest team in Ghana ahould make me relaxed. I will not rush”, he added.

The former  Berekum Chelsea defender joined the reds from a six months spell in the Saudi Pro League and has since been lauded for his defensive exploits, winning the first ever historic club player of the month of July award.