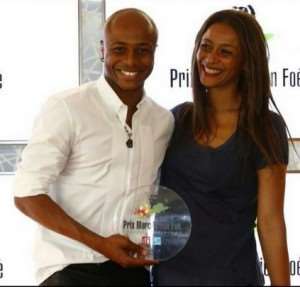 Ayew, 25, received the Marc-Vivien Foé award on Monday after fabulous campaign for Marseille this term.

He received the award with his mother, Maha Ayew, who has been an influential figure in his career.

The Ghana international was picked by a jury of journalists and received the Marc-Vivien Foe Trophy handed out by French radio station RFI and TV channel France 24.