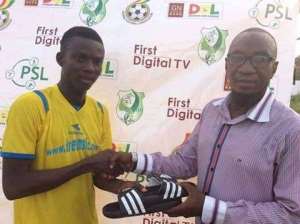 The Communications Director of Dreams FC, Henry Asante Twum, says the slippers award given to the 'man of the match' after games is 'an initiative of Dreams FC'.

An image of Dreams FC player, Emmanuel Sowah Adjei, receiving a pair of slippers from an official as his prize for winning the best player of their match against d'International has gone viral with many believing it is an award presented by the Division Leagye Board.

However, Dreams FC have come out to debunk those claims, saying: "As Communications Director of Dreams FC, I think it is necessary to make this intervention. The warm up aide you see in that picture is not from the Division One League Board," Asante Twum said.

"We have given out a branded Baba Rahman boot in the past, gym boot, warm up bibs, etc."