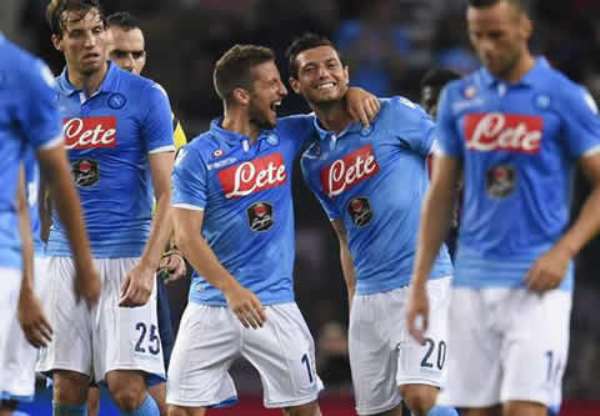 Round-up: Lazio thumped Empoli 4-0, their eighth successive league win, to go second in Serie A on Sunday and Napoli ended their dismal run with a 3-0 win over Fiorentina despite being denied a clear goal.

Hosts Lazio leap-frogged city rivals AS Roma, who were held to a controversial 1-1 draw at Torino as they failed to take advantage of leaders Juventus' shock defeat at otherwise beleaguered bottom side Parma on Saturday.

Relegation-threatened Atalanta, who had a training session interrupted by protesting fans on Saturday, beat Sassuolo 2-1 at home to ease their relegation worries with two goals from German Denis, an overhead kick and a penalty.

Despite Saturday's defeat, Juventus are 12 clear of Lazio and well on course for a fourth successive title. Roma are a further point behind in third, which earns a place in the Champions League playoff round. Napoli president Aurelio Di Laurentiis had threatened to confine his players to a training camp for an "unlimited period" after their semi-final Coppa Italia elimination at home to Lazio on Wednesday, and his outburst seemed to work.

Dries Mertens put Napoli ahead in the 23rd minute with a curling effort and they should have gone further in front just after half an hour when Gonzalo Higuain's long-range shot crashed off the underside of the bar.

Television replays showed the ball crossed the line before bouncing out but the goal line assistant, despite being well positioned, did not see it and play continued.

Serie A does not use goal line technology which will be introduced next season.

In the end, it did not matter as Marek Hamsik and Jose Callejon scored in the last 20 minutes to seal a comfortable home win against a disappointing Fiorentina, ending a five-match winless run in all competitions in which Napoli scored only once.

Lazio raced to a 3-0 halftime lead through Stefano Mauri, Miroslav Klose and Antonio Candreva, and Felipe Anderson added a fourth shortly after the break.

They still had to play the last half hour with 10 men after Diego Novaretti, who came on for Stefan De Vrij just before halftime, was booked twice in 12 minutes and sent off before the hour.

Alessandro Florenzi put Roma ahead with a 57th-minute penalty which was awarded for a foul on Daniele De Rossi, although there appeared to be minimal contact on the volatile midfielder. Substitute Maxi Lopez quickly equalised for Torino, although Roma believed the ball went out of play in the build up.

Atalanta, 17th in the 20-team table, moved seven points clear of the danger zone after beating Sassuolo while third-bottom Cesena lost 1-0 at home to Chievo.

On Saturday, Atalanta interrupted a public training session in front of 1,500 fans to listen to an angry rant by one of the leaders of their hardcore "Ultra" fans.