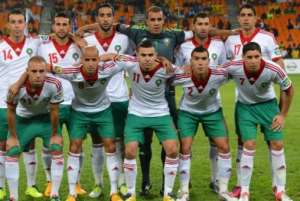 Morocco have been banned from competing in the next two Africa Cup of Nations for refusing to stage the 2015 tournament.

The Moroccan Football Federation (FRMF) stood down as hosts because of the Ebola virus epidemic, after an initial request for a postponement was rejected by the Confederation of Africa Football (CAF), and the event was subsequently switched to Equatorial Guinea.

They are also to pay an amount of 8.05 million euros (9.6 million dollars) ) in compensation for all material damage sustained by CAF, stakeholders and partners as a result of the decision not to host AFCON 2015.

Below is the full statement by CAF
The CAF Executive Committee, meeting in Malabo, Equatorial Guinea on the side lines of the 30th edition of the Orange Africa Cup of Nations took action on the refusal of Morocco to host this competition as scheduled and agreed i.e. from 17 January to 8 February 2015.

Morocco had based its request to postpone the tournament by a year on 10th October, 2014, on allegations “of the highest health risk”. Morocco cited the outbreak of the Ebola virus as a case of force majeure in justifying its request for postponement, citing in particular the risk of contamination of its population because of anticipated fans' flows.

CAF raised objections and inadmissibility of Morocco's request who were obliged to state their position of withdrawal from the organization of the 2015 Orange Africa Cup of Nations by 11 November 2014.

The Executive Committee considered that, contrary to what the Royal Moroccan Football Federation cited, force majeure cannot be accepted for the benefit of the federation.

Thus, according to the provisions of Articles 7.1.a, 23.11 and 62 of the Statutes of CAF and in accordance with Article 41 of the Application of the Statutes of CAF regulations and according to Article 92.4 of the competition rules and the terms of the Framework Agreement signed for the Orange AFCON 2015, the CAF Executive Committee decided to suspend the national team of Morocco from the next two editions of the Africa Cup of Nations, 2017 and 2019, and to impose on the federation the regulatory fine of US$ 1 million (One million United States Dollars).

The CAF Executive Committee decided by a separate measure to be borne by the Royal Moroccan Football Federation the sum of eight million and fifty thousand euros (8.05 million euros) in compensation for all material damage sustained by CAF, stakeholders and partners as a result of the decision not to host AFCON 2015.