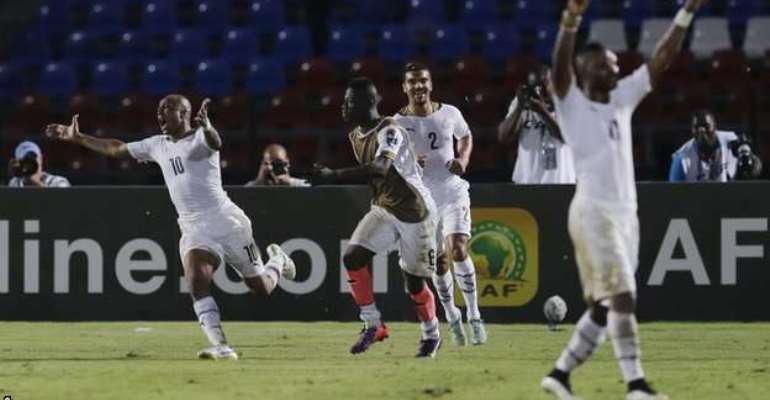 Andre Ayew is in the spotlight again after scoring for his country, this time the winning goal that not only secured all three points for the Black Stars against South Africa, but most importantly qualified Ghana to the next stage of the 2015 Africa Cup of Nations.

Dede was in the right place at the right ti,e to head in Baba Abdul Rahman's well floated cross to give the Black Stars the remarkable victory after trailing to a first half Bafana goal.

The victory, Ghana's second straight win took the Black Stars to the top of Group C and the splendid come-from-behind feat has got some of South Africa's top football analysts, singing the praises of the resilience of the Ghana team.

"The confidence he had to go in to score the goal was just amazing, because the goalkeeper could have smashed him," South Africa's all-time top scorer, Benni McCarthy said on Supersport post-match.

"Seriously I don't think any of the South African players could have gone in for that header. Kudos to Ayew and congrats to Ghana, they were brave and they took their chances," the former UEFA Champions League winning striker added.

McCarthy who shone for Bafana in the 1998 Africa Cup of Nations in Burkina Faso when he finished joint top scorer including netting four goals in a single game, was however not so generous with Bafana Bafana and coach, Ephraim 'Shakes' Mashaba.

"For 20 minutes Ghana were dominant and I was here with my hands on my head, I was wondering if we were going to survive and in the end we couldn't just pull it off. Congratulations to Ghana, they were superior and deserved the victory," McCarthy noted.

He went on to slam the Bafana approach.
"I think lack of coaching is the problem, our players need to be told this, anybody can score goals but if you don't do it everyday in training, its a problem. It's about doing things extra when normal team training is over,' McCarthy charged.