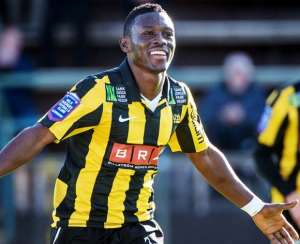 [caption id="attachment_273319" align="aligncenter" width="580"] Abdul Majeed Waris[/caption] Ghana striker Abdul Majeed Waris has exclusively told GHANASoccernet.com he was humbled by reports linking him with a shock move to English giants Manchester United.  The Trabzonspor striker was watched by United's assistant manager Ryan Giggs during a Europa League match two weeks and that gained global attention.The 23-year-old, who was loan hit in the second half of last season for relegated French Ligue 1 side Valenciennes, moved to Turkey in the summer from Spartak Moscow.He recently broke his goal draught for his club in the 1-1 draw game with Belgian side Lokeren.“Manchester United is a big club and to be linked to them gives goose bumps,” Waris exclusively told Ghana's leading football website www.GHANASoccernet.com “I heard it and I read it in the newspapers so it really was a good feeling I must admit.“Now I am in Ghana camp and I am concentrating on helping out my nation now.”Waris made a huge impact in the Swedish League with BK Hacken in 2012 where he banged in 12 goals to win the top scorer prize.He was also named Swedish Premier League's player of the Year.