Andre Ayew to miss out on Ghana's captaincy ahead of Uganda qualifier, Boye tipped 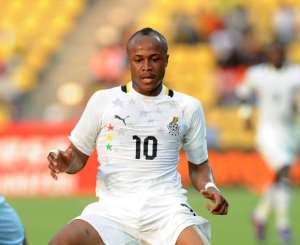 [caption id="attachment_273030" align="aligncenter" width="325"] Andre Ayew[/caption]Andre Ayew could miss out on the Black Stars armband ahead of Saturday's Africa Cup of Nations qualifier against Uganda with John Boye in line for a shock leadership role ahead of the showdown in Kamapa, media reports have claimed.The Marseille winger is hugely tipped to wear the captain's armband but fresh reports in the local media have suggested he could be disappointed.Caretaker coach Maxwell Konadu is yet to settle on his captain for the game and believed to be interested in handing over the armband to another player with John Boye hugely favoured.Ayew has been hugely touted as the second-in-command but doesn't appear he will be handed the leadership role in Kampala a local radio station has reported.Konadu is planning to pull a massive surprise on local fans by denying the 24-year-old the opportunity to lead the team for the first time, according to reports in the Ghanaian media.Substantive captain Asamoah Gyan will be in the stands to watch the game after being ruled out with an injury.The second son of Ghana legend Abedi Pele, who wears the famous number 10 jersey is desperate to follow in the footsteps of his father who captained the Africans for more than a decade.The Black Stars have been decimated by injury to Asamoah Gyan and the suspension of Jordan Ayew.