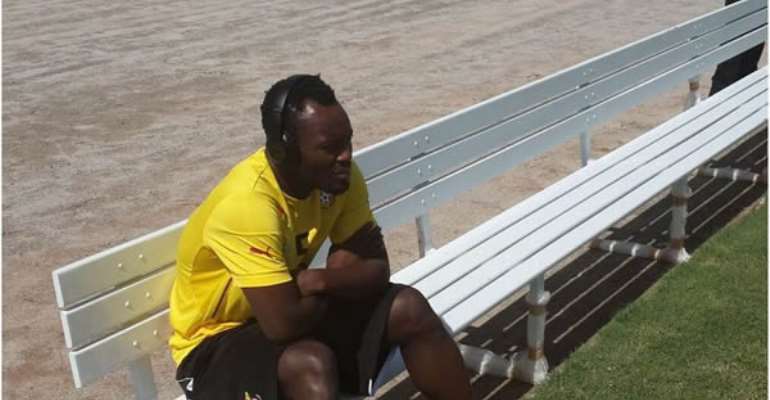 Deputy captain of the Black Stars, Michael Essien has called for a ceasefire after a disappointing World Cup campaign in Brazil triggered an avalanche of fierce criticism.

The coach, players, management and government have come under public criticism for various roles each played in Ghana's record exit from the World Cup.

Ghana exited in the group stages.
Essien who sat out at a training session has been cited for indiscipline in a report prepared by coach Kwesi Appiah to the Ghana Football Association.

His compatriots, Sulley Muntari and Kevin Prince Boateng have been suspended indefinitely from the squad after physical and verbal assaults respectively in the camp.

“While I will be the first to concede that not everything went according to plan before and during our participation in the tournament, I believe that destructive and vicious attacks and counter attacks on individual members of the team as well as the technical and management team are not the solution to the Ghana Black Stars' problems.

“Instead, we must all embrace peace and seek a lasting solution for the team's problems through decent dialogue.” Essien declared in a statement published by Supersport.

BELOW IS THE STATEMENT
I have monitored with great concern, the raging public and media debate about the reasons for the Ghana Black Stars' early exit from the ongoing tournament in Brazil.

Like any other patriotic Ghanaian, and as an avid supporter and member of the Ghana Black Stars, I am deeply embarrassed and devastated by the team's failure to make, at least, Semi Final berth we had publicly promised the good people of Ghana ahead of our departure from Accra.

While I will be the first to concede that not everything went according to plan before and during our participation in the tournament, I believe that destructive and vicious attacks and counter attacks on individual members of the team as well as the technical and management team are not the solution to the Ghana Black Stars' problems. Instead, we must all embrace peace and seek a lasting solution for the team's problems through decent dialogue.

I believe that building genuine cooperation among all stakeholders in Ghana Football remains essential for promotion of trust, transparency, and good governance to ensure prosperity of the senior national team, as well as the sport in general. While I believe we desperately need a peaceful resolution of all the issues agitating our minds and the minds of all fans of the team, I hold the view that we can investigate and resolve these issues without further destroying the team.

I therefore urge all of us who continue to make public comments on the team's painful experience of leaving the tournament as early as we did with just a point[from a possible nine points] to be circumspect in our discourse.

I also urge all involved to please remain calm and allow state authorities interested in investigating the issues at stake to do their jobs without any interference and come out with the truth. It is only then that we can learn from our mistakes and reform all aspects of our preparations for major football tournaments in order to restore the pride and glory of Ghana Football. I strongly believe that it is absolutely the right thing to do for the good and prosperity of Ghana Football.

I therefore want to offer my deepest thanks and support to all those who are urging calm and diligently working to keep the integrity of Ghana Football intact and to avoid any sort of further confrontation at the conclusion of this episode.

It is in keeping with the positions stated above that I have decided to refrain from responding to the GFA's allegation that I had displayed acts of indiscipline before and during the Portugal game in Brazil. In deciding not to respond to the allegations, I am convinced that in the fullness of time, all the facts surrounding the entire episode will become public for the good people of Ghana to judge my guilt or otherwise.

Meanwhile, I wish to thank colleague members of the Black Stars and indeed all Ghana Black Stars supporters around the world, for their continuous support for the team, despite the team's regrettable outing in Brazil. We may have failed this year, but the people of Ghana must continue to believe in the Black Stars.