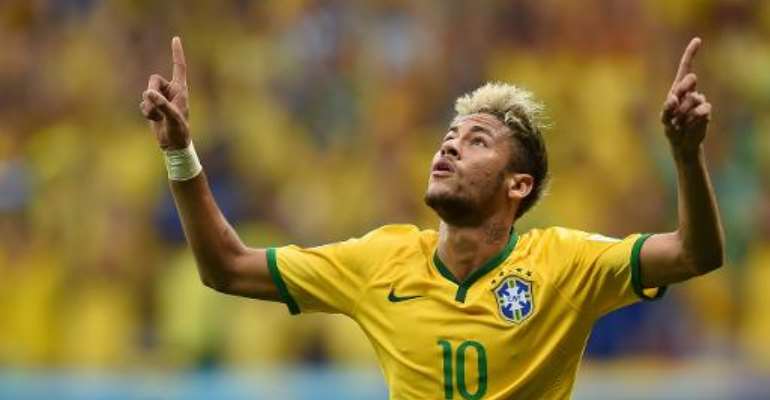 Brazil's forward Neymar celebrates after scoring a second goal during the match between Cameroon and Brazil at the Mane Garrincha National Stadium in Brasilia on June 23, 2014. By Pedro Ugarte (AFP)

The victory secured the World Cup favourites top place in Group A, with a better goal difference than Mexico, and in theory an easier tie in the second round.

Brazil coach Luiz Felipe Scolari will be more reassured by the free flowing display by a team who appeared uncertain in beating Croatia 3-1 and fragile in their goalless draw with Mexico.

Neymar's first goal in the 17th minute was the 100th goal of the high-scoring tournament in Brazil's 100th match in World Cup finals. Luiz Gustavo crossed from the left and Neymar sidefooted it into the net.

But Brazil's number 10 scored a second before half time, picking up the ball on edge of the penalty area and shooting through the legs of defender Nicolas Nkoulou.

His fourth goal of the tournament put him atop the scorers' rankings.

Fred headed the third goal in the 49th minute from a David Luiz cross and Manchester City midfielder Fernandinho strolled through the Cameroon defence in the 84th minute to shoot the killer goal.

Cameroon finished in bottom place in Group A with three straight defeats.