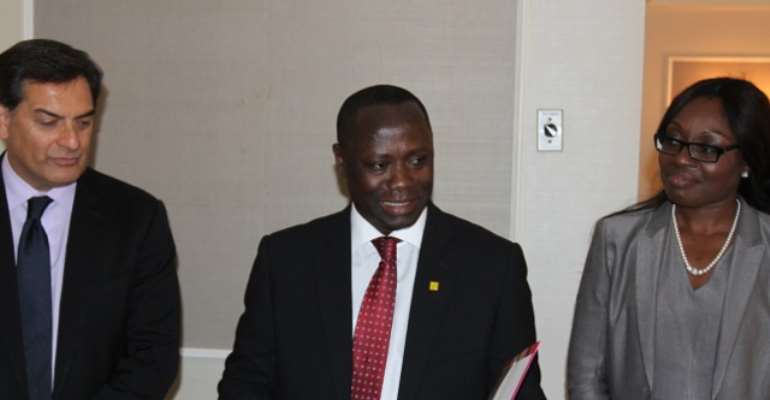 US energy firm Symbion Power has been urged to accelerate its 450 megawatts gas to electricity project to ensure that at least the first 100 megawatts of power is available in early 2015 to help stem the recurring power shortfalls in the country.

Energy Minister Emmanuel Kofi Buah made the call to Paul Hinks, Chief Executive Officer of Symbion Power when the two held a meeting at the instance of the Minister last week.

At the meeting, which was attended by officials from the Ministry of Energy as well as the Chief Executive of the GIPC, Mawuena Trebarh, Mr. Kofi Buah said “the government will provide full support to Symbion Power to put the new power plant on a faster track because Ghanaians are suffering unnecessarily.”

Government, Mr. Buah indicated, will allocate land for the project to ensure that gas will be available for Symbion in time for the commissioning. He charged staff of the Ministry to work with the Electricity Company of Ghana to complete negotiations for the Power Purchase Agreement within one month to pave way for work to commence.

Symbion CEO Paul Hinks, later in an interview with the media, said “We have responded very positively to this request from Ghana and we will work hand in hand with the government and ECG who want us to deliver the first megawatts within a year of signing a PPA.

“We have already received proposals from gas turbine manufacturers and suppliers in the United States and we will begin negotiations for the plant and equipment soon.  The aero-derivative type of power plant we will utilize can be built very quickly. We have extensive experience operating this equipment in Africa”.

When asked if President Obama's Power Africa Initiative would play a role in the project Hinks answered; “It is the support of Power Africa that has spurred Symbion to develop power projects in a number of countries over the past year.  President Obama has created a new model for supporting development in Africa, which sees the US government supporting actors from both the private and public sectors.  It is a unique approach to development that will encourage real investment and not just old-fashioned donor dependence.”

Hinks said: “When a country's economy reaches the stage that Ghana has, it needs to reduce its reliance on Development Finance Institutions such as the World Bank who provide large loans that must be paid back.  Power Africa does not burden countries with debt and the funds that go to the public sector from the US Agency for International Development and the Millennium Challenge Corporation are grants, which don't have to be repaid.  The private sector has to borrow money but that is quite normal for them”

“The MOU we signed with Ghana during the UN General Assembly was the first we executed with a Power Africa country after Power Africa was launched in July 2013.  We have made a commitment to our government that we will invest at least $1.8 billion US dollars of project costs into Africa in five years and by working with financial institutions and our own investors we intend to exceed this number.  It may sound like a lot of money but when you consider that the Ghana power plant will itself cost as much as $600 million US dollars you will see that it does not take many projects to achieve our target,” the Symbion CEO stated.

“Symbion is well known for being a company that gives a lot back to the communities where it operates.  In fact I will say that on a percentage of revenue basis we probably do considerably more than most companies and we are creative.  In East Africa we are building a football academy in partnership with UK Premier League side Sunderland FC.  It will teach academic skills as well as football.  We have done other things such as creating our own academic school in rural Tanzania.  We will be applying the same approach in Ghana”.