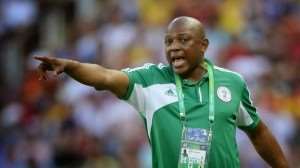 But consolation came to Eagles as they managed to win bronze Saturday after dispatching Zimbabwe 1-0 at Cape Town Saturday afternoon.

Coach Keshi who was running after a historic double Afcon-Chan could do nothing than just take pride in his Chan bronze medal. He therefore expressed having no ill feeling for his failure to achieve his never-attained dream.

“I have no bitter feelings at all,” he said.
“I'm so happy with the boys over these three weeks. They've grown to understand what I want and to express the game the way I want them to.

“Of course it is disappointing to lose a semi-final. Everybody would feel the same way.

“But objective was to see one or two players that could make the World Cup and I've seen some of them even though I will not name them.'