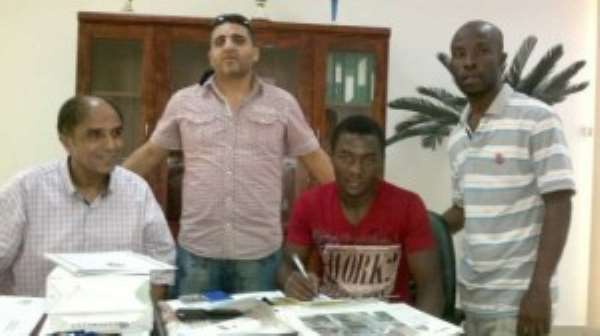 Asante Kotoko will be launching investigations to determine the nature of the contract signed between striker Kofi Nti-Boakye and Libyan club Al Ahli.

The 25-year-old signed a three-year deal with the Tripoli-based side after a successful trial and medical on Wednesday.

The ex Liberty Professionals hitman signed the deal with the Libyan club as a free agent despite having a running contract with the Ghana Premier League champions.

The player is however counting on FIFA's Bossman rule which allows a player with at least six more months left on a running contract with a club enter into a pre-contract agreement with another.

This rule is however only applicable for pre-contract agreements which will mature into a 'real deal' after the expiration of the said player's running contract with a club.

Kotoko are ready to go into these technicalities by first gathering the facts on the mode of the contract signed between Nti-Boakye and the Libyan club.

The Porcupine Warriors risk losing the talented striker who is set to receive a staggering $900,000 fee for absolutely nothing despite giving him the platform to market himself.

“We as of now don't know the nature of the agreement signed between Kofi and the Libyan club,” Kotoko's administrative manager Ben Nti tol Metro941.com.

“His contract with Kotoko was set to be up on August 9 and thus if using the Bossman rule can only enter into a pre-contract agreement until his deal with Kotoko officially expires.

“We however hear he has signed a deal but we do not know for a fact at this point the nature of the deal.

“We look to first investigate and get the facts before deciding on the next line of action.”