LoC / Nani red card : Kean goes against the current of the English press 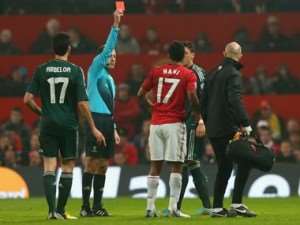 An “act of madness” for the Telegraph . “It's really a shame. We should talk about the exploits of the two best teams in football, but it is the referee who is at the center of conversations, “ adds the Daily Express in its columns.

The English press did not fail to comment on the expulsion of the Portuguese Cape Verdean origin, Nani in the second round of the Uefa return.

Opposition managers aren't usually this graceful in accepting a bad decision. Some players, like Roy Keane, have even gone on record saying that the referee made the right decision.

But when Mourinho walked over to Ferguson and whispered something in his ear after the sending off, it was an easy guess as to what he thought.

Nani and Alvaro Arbeloa went together for an aerial ball, and Nani raised his boot to bring the ball down, catching Arbeloa in the process. Replays showed there was no intent and none of the Real Madrid players were even asking for a booking let alone a red card.